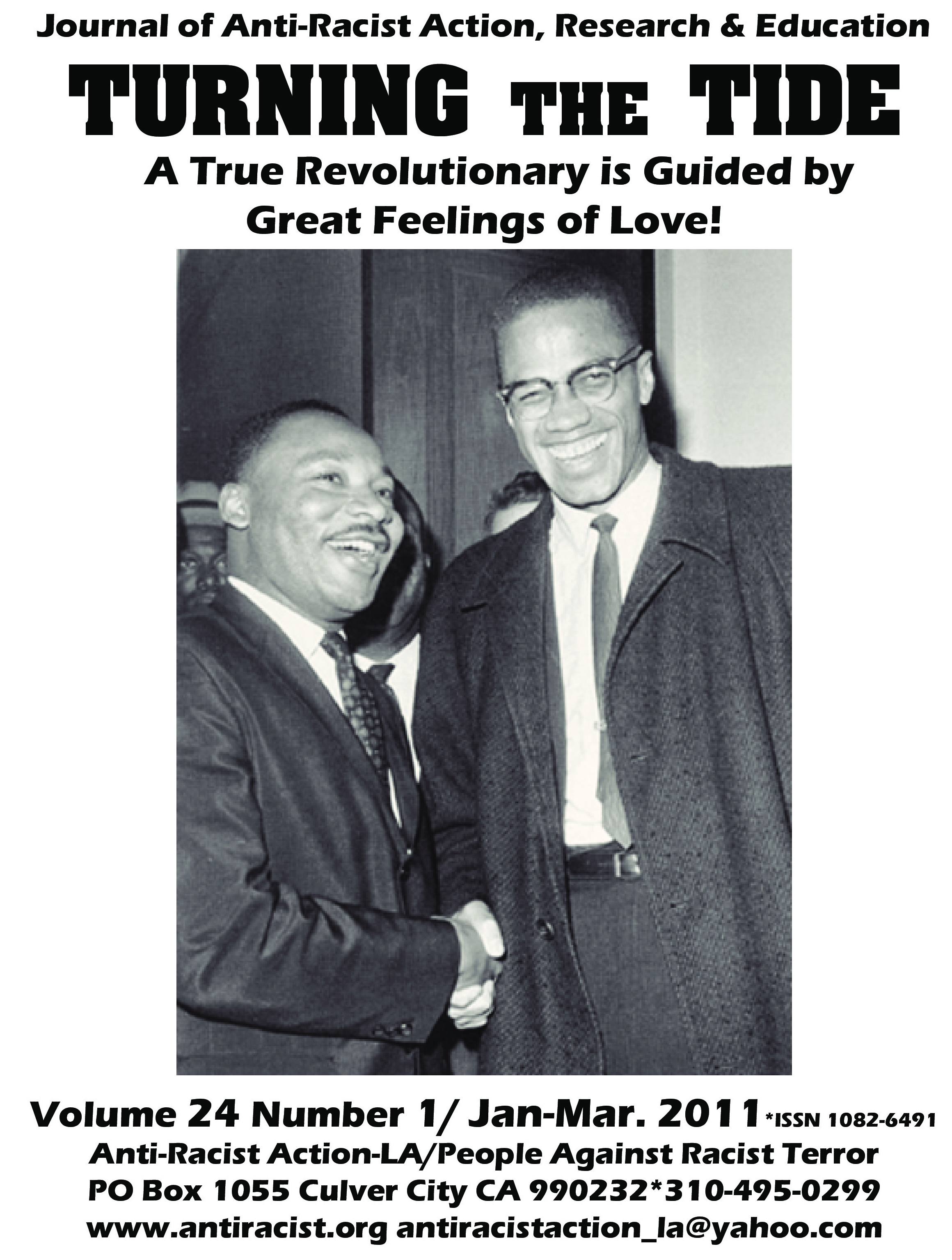 What is the recipe for a revolutionary transformation of this society?

The need for such a process should be as evident as the nose on our faces. The evidence is in the melting glaciers in the Himalayas and the vanishing polar ice cap in Greenland, where the indigenous tell us that the water is now running out from under the ice even in winter. The evidence, as Derrick Jensen eloquently tells us, is in the disappearance of the salmon (not to mention the frogs, the bees, and the fish in the sea). The evidence is in the city of rat-infested cargo containers piling up outside the ports of Los Angeles and Long Beach, because of every six containers of imports that come into that busiest port complex in the U.S., only one goes back out with exports. Not to mention that much of what the US physically exports these days is cardboard, scrap metal, toxic electronic waste for “recycling,” and old clothes.

The evidence is in the pervasive pan-opticon of surveillance, counter-intelligence, and domestic espionage that scans every email, biometrically identifies every face, and sanitizes the results of every search on the Internet. The evidence is in the robot soldiers being developed by DARPA. It’s in the drones that practically fly themselves along the US-Mexico border as well as the ‘tribal’ regions of Afghanistan and Pakistan, and it’s in the coffins that keep coming out of those regions, as well as Iraq, where President Obama has declared the war is over.

The evidence is in the schools of every city in the country, where enrollments are rising and teaching and support staff are dropping. One of the “anomalies” of the recent economic contraction and jobless “recovery” is that it is the first one in which the loss of employment opportunities in other fields hasn’t meant an increase in people opting to be teachers. Recent figures show a 50% drop in first and second year teachers, the result of massive layoffs and ‘reductions in force’ at many school districts. LA Unified may pretend to be worried about “drop-outs,” but the teacher shortage would be insurmountable even with the planned class size increases, if 50% or more of Black and Mexicano/indigenous high school students were not being tracked into the prisons or the grave before they finish school.

The evidence is in the mortality and morbidity statistics for the US, where life expectancy is falling, and the country with the highest total and per capita spending on “health care” has the worst health in the industrialized world. The evidence is in the coming “double-dip” in the housing market, with a new round of foreclosures imminent. The evidence is incarcerated by the millions in the US gulag of jails, prisons and juvenile halls, augmented by those on parole or probation, those underemployed or disenfranchised because of their prior convictions. The evidence is in unemployment so persistent during the supposed recovery that the government has been forced to change its statistical measures to allow for people ‘unemployed’ for up to 5 years.

But if the evidence is so clear, why is the population so docile? Why is the only sign of animus or agitation apparently on the mostly white Right, in the Tea Party, the neo-Confederates, and those who have moved beyond ‘respectable’ white nationalism to neo-fascist and neo-nazi formations? What happened, in the US, to the in-the-streets anti-war movement, or the anti-globalization movement before it? Like Oswald the Rabbit, Disney’s first creation now lurking in Wasteland in a new video-game featuring “Epic Mickey” Mouse, is there a shadowy place where outrage and resistance have gone to lick their wounds?

Actually, the name of the place where throttled and neutered social movements go is widely known. It’s the corporate Democratic Party, where the corpse of environmentalism can dance with the ghost of feminism. There a toothless labor “movement,” like a zombie reanimated by a new generation of “Communists,” can consort with a gay “liberation” movement that fights for the right to enter into the marriage contract and to serve in the imperial armed forces. There, the children of those who, in return for the perks of government office, sold out the dream of equality and freedom of the civil rights movement can encounter the children of migrant workers, whose DREAM of a path to citizenship through assimilation and loyalty to the Empire (at the university or the military) died stillborn. US Out of Iraq, have you met SANE/Freeze? Clean for Gene, I’d like you to meet Change We Can Believe In.

But we cannot blame the Democratic Party for failing to deliver on its campaign promises or our illusions, anymore than you can blame a scorpion for biting you when you give it a ride across the river. The fault is not in our stars, but in ourselves. What are we missing and how can we reclaim it?

The yeast that is lacking in the loaves that keep coming out of the oven flat is three-fold: caring, clarity and audacity.

Caring, because too many of us are like walking wounded, punch drunk from losses. The fighters on our side of the domestic war that the US waged in the 1960s and 70s through mechanisms like COINTELPRO ended up dead, imprisoned, isolated or with a kind of PTSD – post traumatic stress disorder. And so they and we are suffering, and mostly, suffering in silence. We lick our wounds privately, not recognizing or applying our collective capacity to heal and nurture each other. As Che said, as Malcolm demonstrated, “A true revolutionary is guided by great feelings of love.” We need to love ourselves, love the land, love each other and to act out of love to heal the wounds, mend the biosphere, and to make the connections of mutual aid and solidarity that can overcome, while acknowledging, our vulnerabilities and weaknesses.

Clarity, because blinded by identification with or as the oppressor, we refuse to see the true nature of the system we live within and are part of, and of the enemy we confront. The US is and always has been a settler colonial empire, the bastion of reaction domestically and internationally. Behind every one of the problems we confront – hunger, homelessness, police abuse, mis-education, rape, catastrophic climate change, poverty, ill health – stands an implacable enemy whose lifeblood is the profits that flow out of each of those problems. Unemployment, war, militarism, and environmental devastation are not policies that can be changed or ameliorated through enlightenment or education. They are part and parcel of a system of colonialism and capitalism that must be uprooted and replaced. Any effective action we take or change we make will be met with repression, so it must be central to our movements to build the capacity to resist and fight back in the face of repression. And bear in mind that cooptation is a form of repression, the carrot that dangles from the stick. The system has centuries of practice of substituting bourgeois “liberation” movements for revolutionary ones. Based on class collaboration and identification with the Empire and the oppressor, it can stock the ranks of bourgeois women’s movements, or replace conscious hip-hop with materialistic gangsta-glorifying rap. It’s always ready offer a New Deal or just a big deal, the best deal we can get. It’s time to say, no deal.

Audacity, because despite all its might and wealth, the Empire has feet of clay – not only an irreconcilable contradiction with its subjects, the people it exploits and oppresses, but an irremediable contradiction within itself. A system based on stolen land and labor, whose operations destroy the land, the sea and sky, whose growth is inevitably consumed by collapse like the seven fat cows eaten by the seven lean cows in the Pharoah’s dream, cannot endure. The Empire is aware that all its wealth and power come from the people it exploits and oppresses, and whom it cannot do without. The Market knows full well that all of capitalism is a colossal Ponzi scheme, and fears the scales falling from our eyes, the awakening awareness that Property is theft, and that we and the planet are the source of creativity and wealth. They know that they need us but we do not need them. The growing rigidity and repressiveness of their system is a measure of their fear. Their need to colonize every inch of bandwidth, to colonize the human genome and the germinal power of every seed is a measure of both their insatiable greed and their inevitable vulnerability.

It is we the people who must realize our power, who must renew our understanding that, as Huey P. Newton said, the people’s spirit is greater than the man’s technology. We need the audacity to struggle relentlessly by every means necessary, to “use what we got to get what we need.” Key to this is recognizing that, though a new world is possible, it is not a new U.S. that is necessary. The imperial structure of the US, a prison house of colonized nations and peoples, must be shed as a caterpillar sheds its chrysalis to emerge as a butterfly. Inside the belly of the beast, those irreconcilable contradictions that have been muted by privileges and bribes are inevitably re-asserting themselves. Remember that privilege is also a method of social control, along with punishment. Never accept as a privilege what should be yours as a human right. Time to break the chains that bind us to our own oppressors and our own destruction, and take flight!

Buy me a coffee!