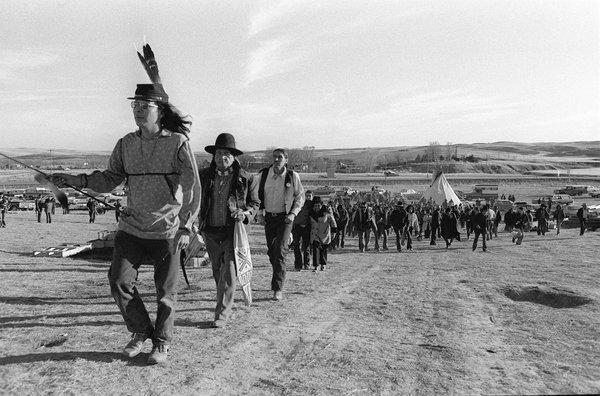 The Heartbeat of Wounded Knee: Native America from 1890 to the Present by David Treuer: New York: Riverhead Books, 2019. 512 pp.

David Treuer is Anishinabek and a citizen of the Leech Lake Ojibwe Reservation in Minnesota. He holds a doctorate in Anthropology and is professor of literature and creative writing at the University of Southern California.  A widely published and praised novelist, literary critic, and essayist, Treuer describes his new book, The Heartbeat of Wounded Knee, as primarily “a work of history,” which weaves into the narrative his own life and stories of ordinary living Native individuals based on hundreds of interviews he carried out over several years. Treuer demonstrated his mastery of the memoir and storytelling in his 2012 book, Rez Life: An Indian’s Journey Through Reservation Life, and that mastery is manifest in the new book.

The title of the present book references Bury My Heart at Wounded Knee by the late Dee Brown. That book was published in 1970, a few months after the seizure of Alcatraz by the “Indians of all Nations,” which continued for another 19 months. Celebrity visitations garnered favorable national and international publicity and Native faces dominated nightly television newscasts. It was not only incorrect but ironic that Dee Brown’s pronouncement that the 1890 army massacre at Wounded Knee was the culmination of the previous thirty years during which “the culture and civilization of the American Indian was destroyed.” Brown’s work, albeit passionately sympathetic, was an updated variation on the 20th century trope of the “dead Indian,” as Treuer points out. Brown’s book has never gone out of print, selling millions of copies, still appearing as recommended reading, and it exists around the world in 17 different languages.

Although with the flourishing of Native American Studies in universities Native activism and scholarship during the past half-century, Dee Brown’s sentimental and tragic approach has waned, but a subtler, yet insidious, version of the terminal narrative appears in questioning the authenticity of contemporary Native Americans, claiming that all the “real Indians” died off.

This is what anthropologist Michael Cox dubs the “terminal narrative—accounts of Indian histories which explain the absence, cultural death, or disappearance of Indigenous peoples.”[1] And this is what Treuer sets out to challenge with what he characterizes as a “counter narrative to the story that has been told about us, but it is something more as well: it is an attempt to confront the ways we Indians ourselves understand our place in the world.”

The book is comprised of seven parts of 30 to 100 pages each, bookended by a Prologue and an Epilogue. Treuer’s own story and his telling of others he interviewed make up most of the book, primarily in the post-World War II second half of the book.  These are the strongest chapters, introducing fully developed Native individuals who speak of their own lives, but also their observations on tribal and government policies and other issues, all with much humor and insight. This is oral history at its best, Treuer’s ethnographic training combined with deeply felt respect.

One of the most informative section of the book is Part 6 on the tribal enterprises and economic development that led to the present “Boom City” for a number of Native Nations, especially based on but not limited to casino gambling. Treuer narrates the perils and advantages of the development of gaming that began in the 1980s. particularly as an expression of sovereignty. He explains, “Sovereignty isn’t only a legal attitude or a political reality; it has a social dimension as well. The Idea and practice of sovereignty carries with it a kind of dignity—a way of relating to the self, to others, to the past, and to the future that is dimensionally distinct.” (388-389) He attributes the emergence of the power of sovereignty to the sometimes reckless, sometimes violent risks that young Native people of the Red Power movement of the 1960s and 70s took in actions, calling for sovereignty and self-determination.

Above all, in the final part of the book characterized by being the “digital” period, Treuer sees a positive paradigm for the future of Native resistance and survival in the ten-month Standing Rock protest of 2016. What made it different and significant, he suggests, was its “manner and its reach…For the first time, activists, individuals, tribal government, and the tribal governments of other Indian nations all banded together in common cause.” Most importantly, the protest didn’t have a face, a dominant leader, rather it was a plurality as Native peoples have always been pluralities that could come together to resist: “We are united by the legacy (and current practices) of colonialism to be sure. But we are and have always been more than what the government has done to us or tried to do to us and failed: mainstream us.”

Throughout the text Treuer emphasizes and demonstrates the survival of Native peoples, stressing that such survival was and is proactive and dynamic not passive. He capsulizes what his elder fellow Anishinabek writer and scholar Gerald Vizenor calls survivance: Vizenor writes, “The conventions of survivance create a sense of Native presence…Survivance is an active presence; it is not absence, deracination, or ethnographic oblivion, and survivance is the continuation of narratives, not a mere reaction, however pertinent.”[2] Treuer’s book fits well within those conventions.

However, the historical narration that begins the book is weak. Part 1 of the book, which sets the stage for the 20th century and the present, is titled “Narrating the Apocalypse: 10,000 BCE-1890.” At 80 pages it is rushed, dense, and not adequately sourced. It reads much like standard US history textbooks that seek to “tell both sides of the story.” Treuer writes:

Although, like other standard histories, Treuer goes on to describe situations in which clearly there was no level playing field, the “tribe against tribe” trope sticks in the mind of the reader and dilutes what can only be called colonial genocide.

But, Treuer never refers to the US wars as genocidal. He has taken issue elsewhere with the use of the term “genocide” in any context other than the Holocaust.[3] Yet, he uses the term, “genocide” to describe intra-Indigenous warfare.

In a brief “A Note on Sources” at the end of the book, which does not mention any actual sources, Treuer writes, “I have tried my best to frame opinion as opinion and fact as fact, if for no other reason than that Indian lives and Indian history have long been given the fancy treatment of poetic and loose interpretations.” The claim of Indian on Indian genocide is not attributed to any source, yet it is stated as a fact. There is considerable slippage in that respect throughout the text.

Unfortunately, Treuer does not make use of current Native scholars’ research and theorizing. This scholarship is extensive and varied, but it places the US colonization of the land base it presently claims full sovereignty over in the context of European colonization of Africa, the Caribbean, Asia and the Pacific since the first venture in 1492, and specifically centering the attributes of settler-colonialism, which brutally dominates the masses to produce wealth for the colonizer. Settler-colonialism seeks to eliminate and replace the Indigenous inhabitants, and in the case of the United States, to institutionalize African slavery and invite European immigration to build the work force. Settler colonialism has a built in genocidal tendency.

This criticism is not meant to diminish the power of the stories or the value of the book, but the flawed historical context leads to some unsettling that nullify the uses of history from the Indigenous perspective itself as a healing agent.

After describing in the last chapter, the power and beauty of the water protectors, the flourishing Native languages programs all over the continent, the newly elected Native members of congress, the soaring Native population and dynamic diversity as well as common dreams and projects, the Epilogue returns to what Treuer regards as the continued Native destructive self-regard as having lost all, of being powerless, of overwhelming tragedy, invoking Black Elk. He seems to be saying the Native people must get over history and move on, as the right-wing privilege white male critics of “identity politics” prescribe. Closing with respectful quotes from founding father Adams and Jefferson, Treuer favors a reconciliation that without reparations, and without a reckoning with what the United States remains, a militaristic, violent, imperialist polity rooted in white supremacy.

[1] Michael V. Cox, The Pueblo Revolt and the Mythology of Conquest: An Indigenous Archaeology of Contact. Berkeley:University of California Press, 2009,11.

[3] The 1948 United Nations’ Convention on the Prevention and Punishment of Genocide, the only technical definition of genocide, lists 5 acts, any one of which, can be considered genocide if “committed with intent to destroy, in whole or in part, a national ethnic, racial, or religious group:” killing members of the group; causing serious bodily or mental harm to members of the group; deliberately inflicting on the group conditions of life calculated to bring about its destruction in whole or in part; imposing measures intended to prevent births within the group; forcibly transferring children of the group to another group.

TTT Editor’s note: Unmentioned in this review but of significance to this journal, which works to free all political prisoners, Treuer has a negative posture toward Leonard Peltier and AIM generally, and is dismissive of their connection to and embrace by elders and traditionals. Yet most indigenous leaders of all political persuasions now call for Peltier’s release.