↓ Skip to Main Content
Home › Brother: A Forum for Men Against Sexism

Brother: A Forum for Men Against Sexism 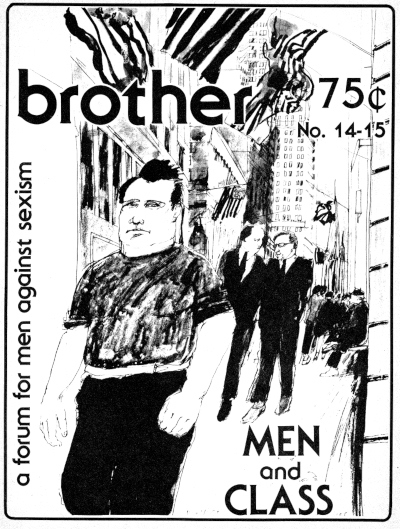 Brother was a publication produced by a collective of mostly white men in the Bay Area that grew out of network of men’s consciousness raising groups that were initiated in the process of preparations for the Revolutionary Peoples’ Constitutional Convention called for by the Black Panther Party.

Here is a PDF of its final double issue, #14-15, from 1976, a magazine-format 8.5×11 inch book with a stiff white paper cover and centerfold, but mainly on newsprint. Forgive the yellowing evident in the scans of some pages.

Working backward in time and sticking with the easiest issues to scan, here is another 8.5×11 inch magazine format issue of brother, this one from about a year prior, a double anthology issue, #11-12, that reprinted material from many prior issues, organized thematically by sections on Men & Women, homosexuality, bisexuality, the men’s movement, men’s bodies, the family, and oppressive institutions such as the military, the prisons, schools and the workplace.