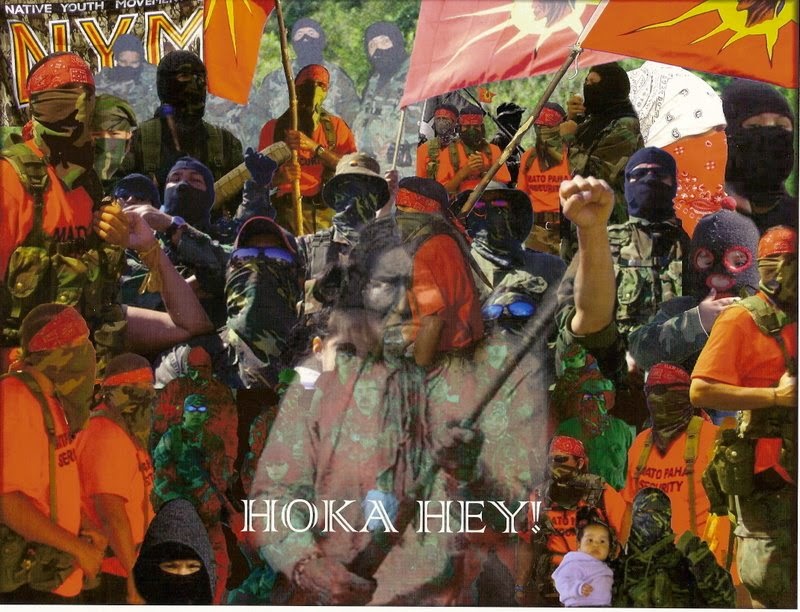 “THE INDIAN WARS ARE NOT OVER”

Three Native Warriors were targeted and arrested yesterday during a protest against the 2010 Winter Olympic Games planned to take place in Vancouver/Whistler, KKKanada. NYM Warrior, Tselletkwe, of the Secwepemc Nation, Gord Hill of the Kwakwaka’wakw Nation and Lynn Highway of the Anishnabe Nation and the Indigenous Resistance Organizing Committee (IROC), were hauled away by the Vancouver Police, who are notorious for police terrorism they inflict on Indigenous Peoples.

The Vancouver Olympic Organizing Committee and the Vancouver Board of Trade were celebrating the unveiling of a “3 year countdown clock” in the downtown business district in Vancouver, marking exactly 3 years until the Olympic Games invade Indigenous Territories here in Vancouver, BC. Just as their festivities were to begin, one Native Warrior stormed the stage and tookover the microphone, yelling, “F*#! the Olympics,” until he was captured by Vancouver police and rushed off stage.

Native People from across BC participated in this rally along with non-natives from the Anti-Poverty Committee, who are protesting the gentrification of their neighborhood and the eviction of hundreds from low-income housing in the downtown eastside. A total of seven protesters were arrested during this Anti-Olympic protest.

NYM Warrior Tselletkwe made a statement upon her release, stating “Our land is not for Sale, we are still at war with KKKanada, we have never surrendered our land. We want the whole World to know not to come to our country and to boycott KKKanada and the 2010 Olympic Games. Tourism is not welcome here.”

This is not the first time Natives have been arrested protesting the 2010 Winter Olympics, Pacheedaht, Nuuchahnulth Elder Harriet Nahanee was arrested and sentenced to 14 days in jail for protesting the expansion and development of the Sea-to-Sky Highway, leading from Vancouver to Whistler, in preparation to the 2010 Winter Olympic Games. The destruction of Indigenous Territories and Sacred Sites must be stopped.

NYM spokesperson, stated in response to the arrests that, “Human and Indigenous Rights violations here in KKKanada must stop, the governments and corporations continue to drive our People from our homeland and destroy our food and medicine harvesting areas and basic necessities to survive our traditional, ancestral way of life. The Olympics is a global event and it will take the global community to awaken their conscience to boycott this 17-day event.”

For more information or to join the Anti-Olympic Coalition contact:

As Aboriginal women on occupied Coast Salish Territory, we, the Aboriginal Women’s Action Network (AWAN) implore you to pay attention to the voices of Aboriginal women and women’s groups. They are speaking out in the interest of our sisters, our daughters, our friends and all women whose voices have not been heard in the recent media discussion on prostitution and legalized brothels for the 2010 Olympics.

We, the Aboriginal Women’s Action Network, speak especially in the interests of the most vulnerable women – street prostitutes, of which a significant number are young Aboriginal women and girls. We have a long, multi-generational history of colonization, marginalization, and displacement from our Homelands, and rampant abuses that has forced many of our sisters into prostitution. Aboriginal women are often either forced into prostitution, trafficked into prostitution or are facing that possibility. Given that the average age at which girls enter prostitution is fourteen, the majority with a history of unspeakable abuses, we are also speaking out for the Aboriginal children who are targeted by johns and pimps.

Aboriginal girls are hunted down and prostituted, and the perpetrators go uncharged with child sexual assault and child rape. These predators, pervasive in our society, roam with impunity in our streets and take advantage of those Aboriginal children with the least protection. While we are speaking out for the women in the downtown eastside of Vancouver, we include women from First Nations Reserves, and other Aboriginal communities, most of whom have few resources and limited choices. We include them because AWAN members also originate from those communities, and AWAN members interact regularly with Native women from these communities.

The Aboriginal Women’s Action Network opposes the legalization of prostitution, and any state regulation of prostitution that entrenches Aboriginal women and children in the so-called “sex trade.” We hold that legalizing prostitution in Vancouver will not make it safer for those prostituted, but will merely increase their numbers. Contrary to current media coverage of the issue, the available evidence suggests that it would in fact be harmful, would expand prostitution and would promote trafficking, and would only serve to make prostitution safer and more profitable for the men who exploit and harm prostituted women and children. Although many well-meaning people think that decriminalization simply means protecting prostituted women from arrest, it also refers, dangerously, to the decriminalization of johns and pimps. In this way prostitution is normalized, johns multiply, and pimps and traffickers become legitimated entrepreneurs.

Say “No” to this lack of concern for marginalized women and children, who in this industry are expected to serve simply as objects of consumption!

The Aboriginal Women’s Action Network opposes the legalization of brothels for the 2010 Olympics. We refuse to be commodities in the so-called “sex industry” or offer up our sisters and daughters to be used as disposable objects for sex tourists. A harm-reduction model that claims to help prostituted women by moving them indoors to legal brothels not only would not reduce the harm to them, but also would disguise the real issues. There is no evidence that indoor prostitution is safer for the women involved. Rather, it is just as violent and traumatic. Prostitution is inherently violent, merely an extension of the violence that most prostituted women experience as children. We should aim not merely to reduce this harm, as if it is a necessary evil and/or inescapable, but strive to eliminate it altogether. Those promoting prostitution rarely address class, race, or ethnicity as factors that make women even more vulnerable.

A treatise can be written about Aboriginal women’s vulnerability based on race, socio-economic status and gender but suffice it to say that we are very over-represented in street-level prostitution. There may even be a class bias behind the belief that street prostitution is far worse than indoor forms. It is not the street per se or the laws for that matter, which are the source of the problem, but prostitution itself which depends on a sub-class of women or a degraded caste to be exploited. A major factor contributing to the absence of attention given to the women who have gone missing women in Vancouver is the lack of police response, and the insidious societal belief that these women were not worthy of protection. This message is explicitly conveyed to the johns, giving them the go-ahead to act toward these women with impunity.

If we want to protect the most vulnerable women, we could start by decriminalizing prostituted women, not the men who harm them. Although it is not mentioned in the local news, the Swedish model of dealing with prostitution provides an example we should seriously consider. It criminalizes only the buying of sex, not the selling, targeting the customer, pimp, procurer, and trafficker, rather than the prostituted woman, and provides an array of social services to aid women to leave prostitution. Given that the vast majority of prostituted women wish to leave prostitution, we should focus on finding ways to help them to do that rather than entrenching them further into prostitution by legalizing and institutionalizing it.

Here in Vancouver, if we are to help those most in need, young Aboriginal women, it would help to think more long-term, to focus on healing and prevention. Let’s not get tricked into a supposed fix that is not even a band aid, but only deepens the wounds. AWAN demands that Aboriginal women have the opportunity to raise our families within our Traditional values of having a respected position for women and children in our societies. The single most effective way of achieving that goal is empowering and resourcing Aboriginal women’s groups, such as AWAN, so that we can organize, engage with other sectors of society and speak with our own voices.

We have a great deal of certainty that organized Aboriginal women’s voices would be calling for “Exiting” programs and services, support for Aboriginal women and children, and an end to forced prostitution. Don’t let Vancouver enter into the 2010 Olympics wearing the black-eye of decriminalized prostitution and legalized brothels that drive Aboriginal women further down the Human Rights ladder of Canadian and Vancouver society. Posted by: [email protected]