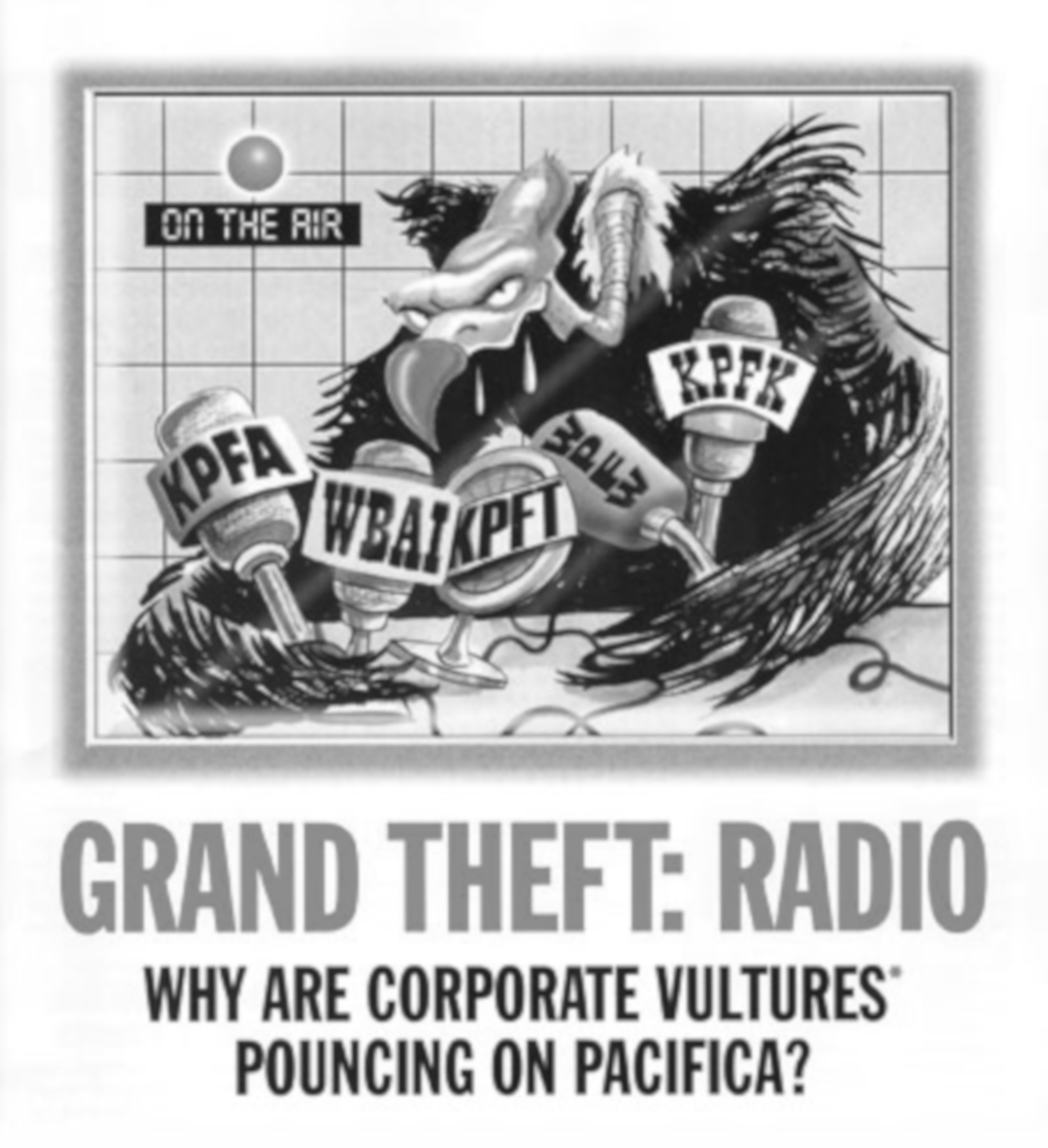 While the government cracks down on “pirate” radio, the real acts of radio piracy have been taking place behind closed doors at the national boardrooms of the Pacifica Foundation, which is the FCC licensee for listener-sponsored radio stations in New York, Berkeley, Washington DC, Los Angeles and Houston. Increasingly over the last several years, Pacifica [station]s — particularly in northern and southern California – have made revolutionary voices from African, Mexicano/Latino and other communities of color unwelcome on their air. Now, events have taken a dramatic turn, as the national board of the network has been accused of union-busting in its efforts to exclude unpaid staff from collective bargaining, found by an FCC [sic –it was a CPB audit] auditor to have violated open meeting regulations in its effort to hide its ongoing power grab from public scrutiny or accountability, and suspected by many current and former staffers and listeners of planning to sell off some of Pacifica’s most valuable frequencies, in New York and the Bay Area, where WBAI and KPFA have positions in the center of the FM dial, rather than isolated off on the left end among low power university stations, where most listener sponsored stations are segregated.

In a recent action, the national board has apparently arrogated to itself the ability to be a self-perpetuating majority, by establishing that a majority of the seats on the board will henceforth be selected by the board itself, rather than elected by the local boards of each of the community stations. This appears to be the final nail in the coffin of democratic governance at Pacifica and follows on the heels of major shake-ups in staffing and programming at several of the stations. The Pacifica network has moved increasingly towards nationally-produced and syndicated programming of a liberal nature, to replace grass-roots, community-oriented programmers that provided a voice to more radical elements.

Thus, KPFK in L.A. has slashed Spanish language and Chicano programming, in a community where Mexicanos and Central Americans form the largest segment of the population, and where the highest rated radio and TV news programs are in Spanish. Instead, they air “Latino USA,” a slickly produced program out of the University of Texas at Austin, which is syndicated by NPR and actually features credit lines for its corporate underwriters, despite Pacifica’s long-standing prohibition against accepting or airing such corporate sponsorship. Similarly, revolutionary Black programs, such as Family Tree and Continent to Continent, an African Issues Magazine, featuring voices from the Malcolm X Grassroots Movement; Black Women for Wellness, the Patrice Lumumba Coalition, and other similar groups, have been summarily dropped. In their place are Black commentators with liberal to conservative views that Pacifica apparently is more comfortable with.

KPFA in Berkeley recently censored remarks by long-time Pacifica favorite, Helen Caldicott, who has a show aired by WBAI in New York, when she urged her listeners in a taped speech at a public forum to get involved to defend Pacifica’s waning commitment to free speech. In ironic validation of the very problem she was addressing, KPFA snipped the remarks from her speech when they ran it. The network’s obsession with not airing what it calls “dirty laundry” has led to firings and disciplining of staffers, and extended to removal of flyers from programmers mailboxes at the station, as well as a prohibition on announcing any events on the “community calendar” that deal with Pacifica accountability.

Get involved if you live in the listening area of any of the stations (or other community stations that, with increasing reluctance and discomfort) are carrying Pacifica programming. For more info, check out http://www.radio4all.org on the World Wide Web.