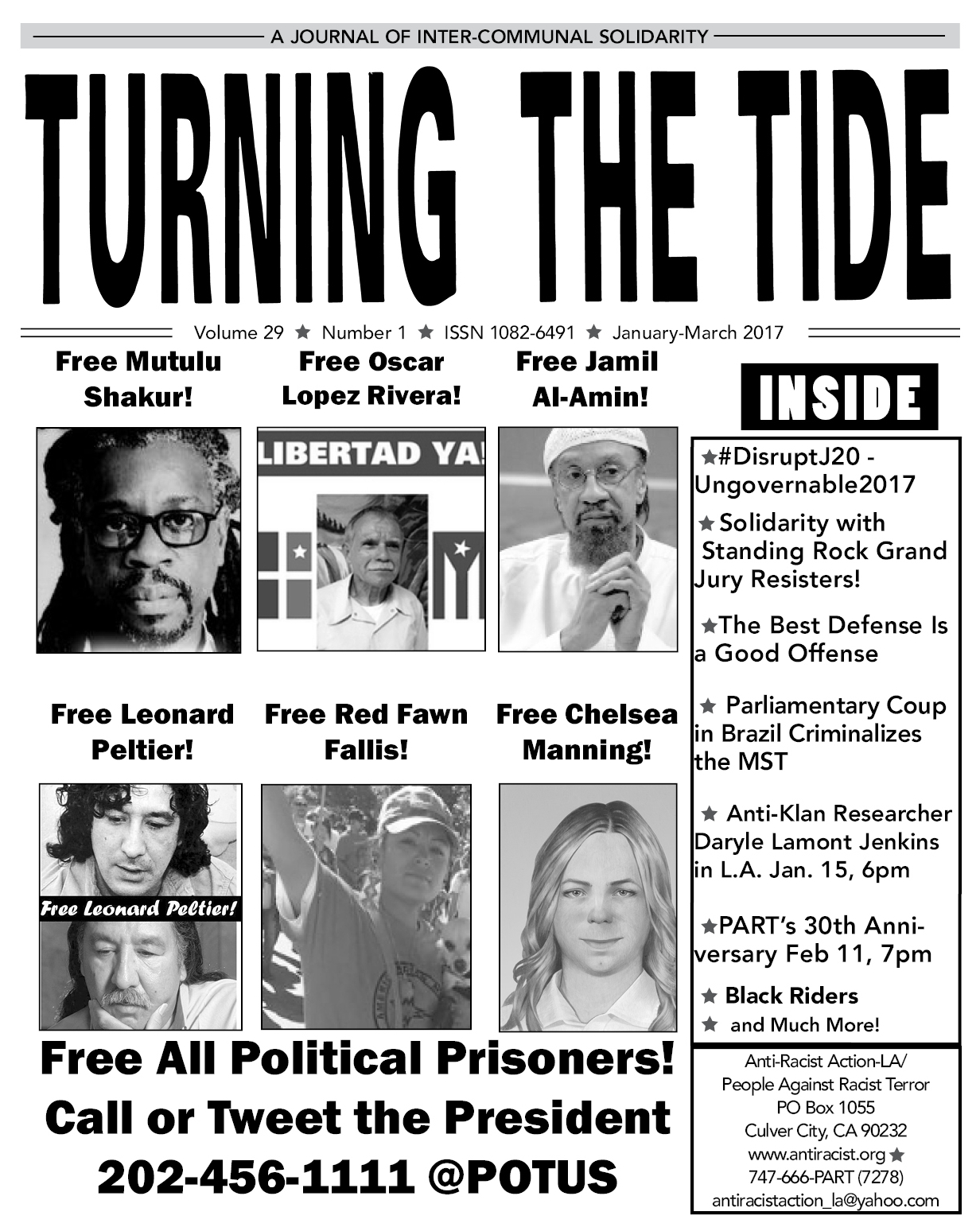 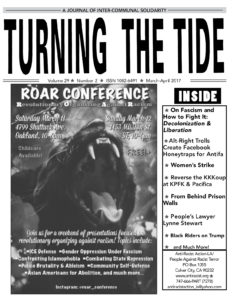 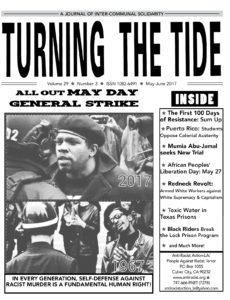 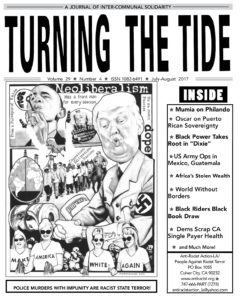 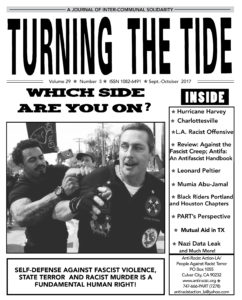 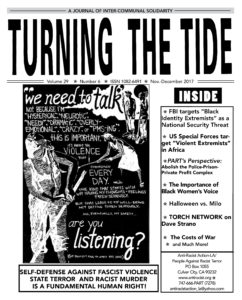 The Los Angeles Board of Police Commissioners, AKA the LAPC, exposed its true nature once and for all, hopefully, when it voted in October to authorize the use of drones by LAPD’s Special Weapons and Tactics (SWAT) unit, despite 90+% opposition from the public at every hearing they scheduled to try to whip up support. They also thereby tacitly acknowledge that despite their denials, drones are essentially weapons. 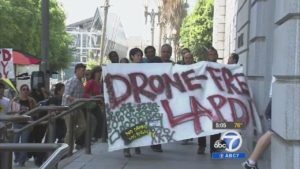 It’s probably no coincidence that with the “technical assistance” of the LAPD, CBS this month is reviving “SWAT” as a TV show, purportedly demonstrating that the unit is a mechanism for community responsiveness and engagement. 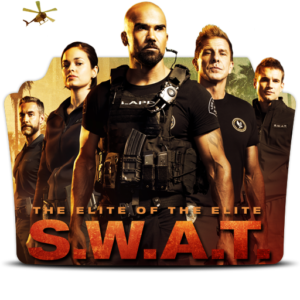 The LAPD’s own polling and survey instruments show a growing lack of trust for the department, especially among Black and Brown residents. The challenge facing community organizers is how to deepen that mistrust, and the condemnation of racist killings by police with impunity, into a widespread awareness that, as enforcers of exploitation, oppression, white supremacy and colonialism, the police have no legitimacy whatsoever. And then how to translate such awareness into resistance and a struggle for community defense and a better world.

Black Lives Matter has begun challenging L.A. District Attorney Jackie Lacey, who has not indicted a single cop in 5 years for any of the approximately 300 police killings that have taken place in the county under her watch. But again, the challenge is to develop a campaign that gives meaning to the recognition that there is “No Justice – Just Us!” — that the entire criminal injustice system of prosecutors, courts, judges, cops, jailers and prisons, is part of the oppressive and repressive mechanism of a settler-colonial, patriarchal, racial-capitalist society that must be uprooted and transformed. 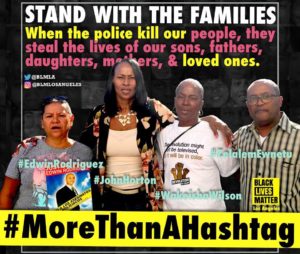 Critical Resistance and other “prison abolitionists” inside and outside prison walls have focused attention on the continued legalization of prison slavery under the 13th Amendment, the enormous social and financial costs of racialized mass incarceration, the continuing price that formerly-incarcerated people and their families pay even after release from prison because of punitive laws and social practices. But the challenge remains, how can we regain the absolute moral and political condemnation of slavery that the original abolitionists had, the commitment to extirpate the ownership of human beings root and branch, and translate it into a powerful mass movement to abolish prisons, police and the entire system they enforce?

This is the fundamental question we must answer, the essential challenge we must meet, if our efforts are to have success. Otherwise, our piecemeal reforms and victories may result in an occasional officer being tried or even convicted, an occasional DA or judge being voted out of office, a police chief or three losing their jobs, an occasional prisoner being freed and recompensed, while the system strengthens is capacity for counter-insurgency policing, conducting mass surveillance, and building a carceral state apparatus. 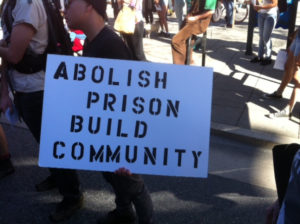 The formula is fairly simple: unite our forces, and divide, disperse and undermine our enemy’s ranks and support base. Carrying it out in practice over the long term is the difficulty.

What does it mean to unite our forces? We need greater collaboration and communication among those dealing with racist police killings with impunity, those opposing mass incarceration and prison slavery, those challenging political imprisonment and state repression, and opponents of the death penalty or other particular injustices. The principled basis for such unification must be a common recognition that these issues and problems are systemic in nature. The solution is not better training, stricter oversight, or fairer sentencing, but a struggle for a society based on fundamentally different principles of self-determination, solidarity, liberation, equality and mutual aid.

This same paradigm applies not just to organizing around “criminal justice” issues of policing and prisons, but to all other areas in which the oppressive, exploitative nature of this system creates contradictions between human need and freedom and the maintenance of a system of privatized land theft and profit extraction. Tenants facing eviction or deplorable housing conditions, homeless people, homeowners facing foreclosure, people in public housing facing privatization, neighborhoods grappling with displacement and gentrification are all facing aspects of the same beast: private ownership of stolen land. The under- and unemployed, minimum-wage workers, women working a “double-shift” in the home and the workplace, prisoners forced to labor for a pittance, unions facing campaigns to decertify them or strip them of the ability to organize politically or to bargain collectively similarly are contending with different aspects of the same system of private control of social labor. 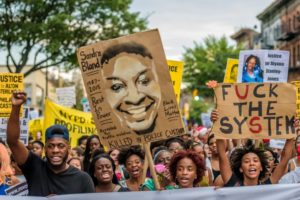 Dividing and subduing our enemy is also easier said than done. The first requirement there is the recognition that we have an enemy, one whose survival depends on its ability to maintain its dominance over us, and who therefore is implacable in a life-or-death struggle against us. We must make an accurate assessment of it forces, not just the military power at its command in the armed forces, but the extent of people who see their interests dovetailing with the relatively few at the top who suck up the lion’s-share of the wealth the system of exploitation of people and nature generates. This includes in the US most of the hundreds of thousands in the ranks of local, municipal, county, state and federal law enforcement and so-called “correctional” and detention facilities, border guards, and the for-profit corporate entities that have contracts to interface with, enhance, outfit and extend those mechanisms for surveillance, suppression and confinement. It also includes many in the ranks of the volunteer US military, especially career military, and the vast network of defense industry corporations, mercenaries, private corporate security forces, intelligence operatives, and others. Historically, in many imperial societies, veterans of all those uniformed services and agencies are another base for reaction.

However, within all those sectors, contradictions around race, gender, class and other social aspects are still operative, and should be addressed. Recent examples, such as Black NYPD officers expressing solidarity with Colin Kaepernick’s “take a knee” protests against racist police murders is an example. For all of them, as for people on our side of the divide, we need to project the alternative we offer to the systems we want to abolish. Grievance and injury are not enough; people need and want to know what they are fighting for. Projecting a credible alternative, beginning to demonstrate in practice the kind of better world we are fighting for is thus critical to both uniting our forces and dividing theirs. 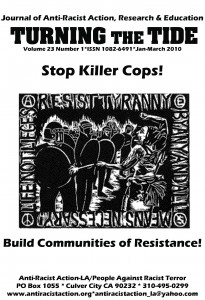 Another key is finding wedge issues that will divide the masses of the ruled and governed from the system they predominantly buy into and give their consent to. This involves transforming repugnance at Trump into opposition to the empire; anger at killer cops into repudiation of the system they enforce and that protects them; frustration with routinized sexual harassment into desire for a world free from patriarchy and the commercialization of hyper-gendered sexuality. To do this, we need to be engaged with people in meaningful workplace or community-based organizing to meet basic human needs and defend human freedom and dignity through self-directed action. We need to make study of our own potentials and of the nature of the enemy and its system appealing and productive. We need to take a page, not from the right, which has a relatively easy job of basing itself on the reactionary character of white settler culture and identity, but from the military forces of the empire, who understand how to identify and deal with their own weaknesses and challenges and those of their adversaries. Only by doing so will we be able to inspire and unite people around the possibilities of victory and a better world.

A major example of an area where our movements are failing to grasp and deal with the contradictions challenging the empire is the issue of the opioid epidemic. I am not aware of any major local or national initiative from the left to deal with opioids theoretically or practically, to engage under principles of mutual aid, solidarity and direct action with people and communities plagued by this crisis.

This is a serious failure. During the heroin epidemic in the Vietnam War era, the left led in a critique exposing heroin as a form of chemical/biological warfare by imperialism, such as in “Capitalism + Dope = Genocide” by Cetewayo of the Black Panther Party. 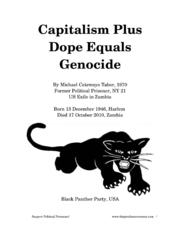 The left was involved in healing efforts, such as Lincoln Detox and Dr. Mutulu Shakur’s efforts through the Black Acupuncture Anesthesia Association, and in direct actions against the drug plague and dealers by the BLA. During the crack cocaine epidemic, the left also led in efforts like the Crack the CIA Coalition to expose the links between drug traffic and US imperialist war in Central America through the Contras, stop the flow of drugs, and expose the racist discrepancies between penalties for crack and powder cocaine and the stigmatization of “crack whores” and “crack babies.” 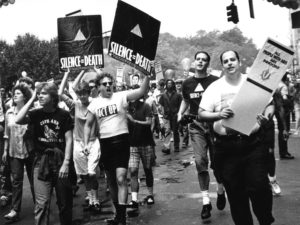 During the AIDS epidemic, it was the left, primary ACTUP, that led efforts to end the stigmatization of gays, Haitians and all HIV-positive people, to demand government action, to deal with the international scope of HIV, and to create needle-sharing and other harm-reduction programs.

The opioid epidemic is clearly related to the War on Terror and the community destruction of necrotic monopoly-financial capitalism, and the death throes of US settler-colonialism and imperialism. The left must step up with more than exposures of insurance companies or Big Pharma. We need to engage in direct action and political struggle with the families and communities contending with opioids.