↓ Skip to Main Content
Home › anti-fascism › Fight for the Future

Fight for the Future 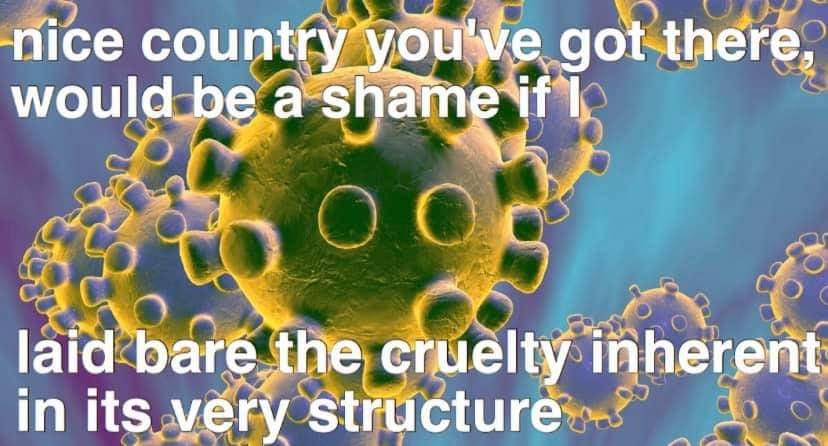 Fight for the Future

The impact of the COVID-19 pandemic in the US, where as we were (belatedly) going to press, the number of cases are the highest in the world, and the mortality rate was climbing and spiking, has been an object lesson to poor and working people, oppressed and colonized people, and the general population, of exactly what it means to live in the world bastion of reaction. Capitalism kills, and the USA, because of its roots in and continuing practice of settler colonialism, land theft, genocide, enslavement and racial capitalism, is, in the words of Mumia Abu-Jamal, Murder Incorporated.

In October 2019, the Bill and Melinda Gates Foundation/Bloomberg School of Public Health conducted a “table-top” exercise planning for a novel corona-virus global pandemic (a Center for Health Security planning exercise), urging governments and private businesses to work together to allocate and distribute medical supplies and treatments and deal with other aspects of such a pandemic. Videos can still be seen on-line here: http://www.centerforhealthsecurity.org/event201/videos.html

Real Planning is Impossible  Under Capitalism

These videos illustrate the impossibility of real planning under capitalism. They talked endlessly about how only private global supply chain corporations could deal with providing necessary medical supplies and treatments, how to deal with impacts on global transportation, how to handle the impacts on the financial system, and the possibilities of controlling the Internet to prevent panic.

They called for cooperation between WHO and private global supply chain providers. They concluded that 65 million deaths would result as the disease spread through impoverished mega-cities, and that the impact of the economic contraction would last for years. Their exercise assumed a much slower pace of the spread of the pandemic than what has actually occurred, and a less precipitous drop in economic output and in stock values (always a big concern for the big bourgeoisie) than now seems to be the case IRL. How accurate their prediction of deaths proves to be remains to be seen.

The coincidence of their game-playing with the actual outbreak of the COVID-19 pandemic within a couple of months has of course provoked an array of mostly right-wing claims that the whole thing is either a “false flag” bio-weapon attack, or a New World Order-Bilderberg plot for population reduction. Since the event was not closed door but covered by the media and remains posted on the Internet, it’s safe to conclude that such conspiracist thinking is opportunistic fear-mongering, which only obscures the more fundamental truth of class contradiction, capitalist impotence to overcome the inherent contradictions of their system, and the way in which capitalist agriculture and land use encourages the development of increasingly virulent pathogens. 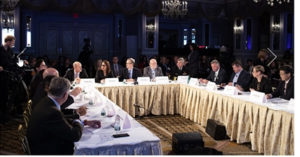 The players came up with seven major recommendation from their sobering “game”, excerpted here:

“1. Governments, international organizations, and businesses should plan now for how essential corporate capabilities will be utilized during a large-scale pandemic. Public sector efforts are likely to become overwhelmed. But industry assets, if swiftly deployed, could save lives and reduce economic losses.

Accomplishing the above goals will require collaboration among governments, international organizations and global business.”

Reality has demonstrated capitalism’s complete incapacity to accomplish any of those goals. Goal #5 is especially interesting, because no corporation has ever “invested” in anything absent the expectation of a financial return on investment, an increase in profits. That’s the nature of the beast. As a participant admitted in one of the videos, “nobody” manufactures goods for which there is not an immediate market (or at least not under the iron laws of capitalist competition).

Goal #6 is also telling and unusually frank. It would be naive to imagine that a panel convened by Gates and Bloomberg would prioritize anything other than “reducing the economic impacts of .. pandemics.” The idea that international organizations might instead want to prioritize public health and human survival would of course never cross their minds.

It would be an interesting investigative journalism project to see if any of the “players” in this table-top planning exercise has contracted COVID-19. One is from the CDC. Stephen C. Redd is the Deputy Director for Public Health Service and Implementation Science at the Centers for Disease Control and Prevention (CDC). Dr. Redd currently oversees the Center for Preparedness and Response; the Center for Global Health; the Center for State, Tribal, Local, and Territorial Support; and the Office of Minority Health and Health Equity. http://www.centerforhealthsecurity.org/event201/players/index.html

Unfortunately, Trump gutted funding for the CDC before this “game” took place, and eliminated the Pandemic preparedness section of the National Security Council. Charged with coming up for a test for infection by the virus, instead of using the one from WHO, the CDC and the Food & Drug Administration failed massively. Native tribal peoples and the African descent Back population in major cities are the two hardest hit groups: Black people are 40% of COVID deaths nationally, AP reports, 70% in Mississippi, Louisiana & Milwaukee, WI, because of the underlying racist economic and health inequities that the SARS-CoV2 is now exploiting just as the capitalists do.

The antidote to the ravages of COVID-19, and the required physical distancing, on the population and the economy is social solidarity, and socialism; true mutual aid as the organizing principle of society. The reason there aren’t enough masks for medical personnel, let alone all the workers who need them — the grocery clerks, postal carriers, field hands, fast food workers, machinists, janitors, teachers, check-out cashiers or nannies — is not merely because Trump fucked up, but because as a commodity under capitalism, such products have been outsourced, so that the maximum value can be extracted from super-exploited labor. 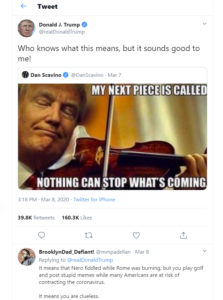 They’re produced within a global supply chain in quantities established by the market for maximum profitability and efficiency on the distribution end as well, according to the principles of just-in-time inventory control — the same reason stores ran out of toilet paper when everyone tried to buy some extra at the same time. The cornucopia does not fill itself endlessly and automatically; provisions are provided by collective and coordinated human labor.

Solidarity is the Antidote

Solidarity is an antidote — not to COVID, but to the far more destructive viral memes that govern our consciousness and behavior under capitalism and colonialism: look out for number one, money talks, America first, nice guys finish last; you’re fired; if you’re white, you’re all right, if you’re Black, get back; you’re beautiful when you’re angry; don’t worry your pretty little head about it– all the sickness of the spirit and the lack of moral guidance that brought us Trump. Our latest wartime president is learning willy-nilly that bullets and bombs are useless against a virus — and in fact, in the long run, are useless against the desire for freedom of a united people. We need to drive that lesson home by demanding an end to sanctions and war-mongering against Iran, Cuba, Nicaragua, Venezuela and other countries the US targets.

Sheltering-in-place has demonstrated in a few days’ time that this society runs on the work-a-day people who make and move everything. Their lockout, their enforced absence, has taken big business and Wall Street to their knees in a matter of days. Let this be a lesson to us all about the power of the general strike, the capacity to topple the high and mighty by withholding our labor, refusing to consent, ending our identification with our oppressors and exploiters.

Power to the People

All the power the rulers possess is taken from the people they oppress; all their wealth is stolen from the people and the land, the bountiful products and ecosystems of nature that capitalism is ruining. The modern alchemists who spin gold out of the blood, sweat, toil and tears, the likes, tweets and data of billions, understand very clearly that unless they keep extracting it daily, hourly, their wealth and power can vanish in an instant, like the housing bubble and stock market bubble that inevitably popped; like the banks that could never provide even pennies on the dollar if everyone came for their cash like they do for toilet paper. We need to seize this crisis as a teachable moment, a learning moment when that truth becomes clear, like an epiphany, to the people being exploited and oppressed. 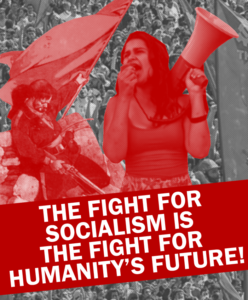 We need to use that understanding and that popular, creative power to shape a new, better and different world “out of the ashes of the old,” as Solidarity Forever has it. We need to transform agriculture so it no longer drives the evolution of virulent pathogens through gigantic hog and poultry operations that ‘perfect’ and transmit micro-organisms from wildlife into humans. We must end the carceral state now and forever. We must say that we will not allow the respite that this breakdown of global capitalism has given to the environment, the reduction in toxic air pollution and greenhouse gases, to be reversed back to “business as usual.” We must take this moment of crisis not just to demand debt or rent relief, but to expropriate the expropriators, to end usury and private ownership of land once and for all. We must organize not just for hazard pay or safety, but to end the wages system and take over the means of production, in order to meet human needs, environmental restoration and social good. 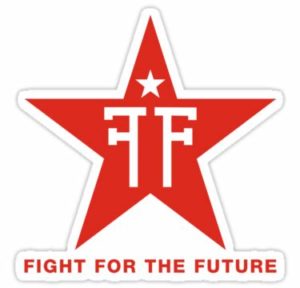 We cannot afford to miss this critical opportunity to fight for the future, or we may not have a future!