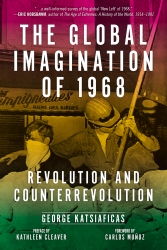 Documenting The Eros Effect:
The Global Imagination of 1968: Revolution and Counter-Revolution
Revised and Expanded Edition 2018 from PM Press
by George Katsiaficas; Preface by Kathleen Cleaver; Foreword by Carlos Munoz

About half of this new edition of Katsiaficas’s essential survey of the New Left and its impact is devoted to a sweeping examination of simultaneous uprisings in the late 1960s and into 1970, most of which failed to “seize power” (nor necessarily saw that as their goal), but which had an enormous impact, which the author denominates as “the eros effect”.

“The ruptures of 1968,” he says, “marked the emergence of new values, ideas, and aspirations …These intense periods of class struggle were important to the self-formation of the human species…The new realities created by the eros effect…were not limited to elite regime change, but transformed entire populations.”

Katsiaficas documents this with a survey of countries in Asia, including Korea, China, and the Philippines, the Arab and Muslim world, including Tunisia, Egypt, Iraq and Iran, Australia and New Zealand, African countries including Nigeria, Senegal, South Africa, Ethiopia, the Portuguese colonies and Zaire; Europe, including West Germany, Italy, England and Czecholovakia; and “Latin” America, including Mexico,  Argentina, Uruguay and Chile, as well as the rise of Black Power movements in the Caribbean.

Katsiaficas does much longer and more thorough case studies on May 1968 in France, and May to September 1970 in the US, one of the largest and most extended student strikes in the world (as well as a closely related revolt within the US military itself) which resulted in the abolition of compulsory military service (the draft) and creation of an “all-volunteer” army.

The book, which concludes with a review of global uprisings after “1968”, is mandatory for its examination of the effects of liberatory struggle on the human psyche and character development and for its interactive impacts of racial, anti-colonial and gender liberation movements on the conceptions and possibilities of class structure and of the prospects and conceptions of a better world. ISBN: 978-1-62963-439-5, available from PM Press, PO Box 23912, Oakland CA 94623; www.pmpress.org.–MN