The World is in Flames and the US is Barely Smoldering The World is in Flames, and the US is Barely Smoldering

There are simultaneous protests going on around the world on a scale perhaps not seen globally since the uprisings of 1968 shook the imperialist system to its foundations. Massive demonstrations in Ecuador nearly toppled the government and forced a roll back of exploitative policies. In Chile, protests against a rise in Metro fares have led to the government announcing a state of emergency in two provinces, including the capital. 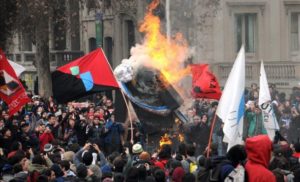 In Haiti resistance to the US-imposed government is growing steadily despite repression. 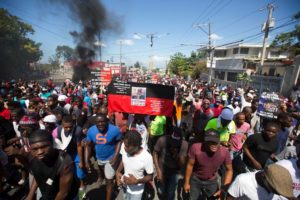 Protests erupted in Egypt for the first time since the suppression of the Arab Spring. A million protesters have poured into the streets in Lebanon day after day. Spain has been rocked by protests since the sentencing of leaders of the Catalan sovereignty struggle. The global climate strike brought millions into the streets, particularly in Germany but also in many other countries on every continent including Australia. Thousands of Indonesian youth protesting a new, repressive criminal code have been met by water cannon and tear gas; while West Papuans protesting Indonesian military occupation and colonization have faced even more intense repression. 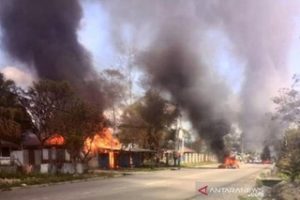 Extinction Rebellion in the UK and militant environmentalists in Germany have engaged in effective “shut-it-down” civil disobedience actions over climate change. Over one-third of the entire population of the US colony Puerto Rico went into the streets to demand the ouster of the governor, and the cancellation of the unjust debt to Wall Street vulture capitalists. 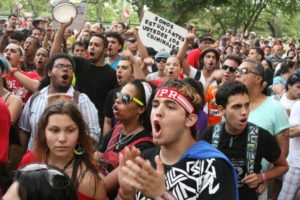 French farmers are joining their Dutch counterparts in clogging the roads with tractors to protest agricultural policies, while the yellow vest protests have continued for almost a year and spread from Paris to other parts of the country. Tens of thousands have been protesting in Moscow against repressive moves by Putin’s government. Massive protests in Peru greeted an attempt by right wing legislators to carry out a parliamentary coup similar to that in Brazil (where indigenous peoples and landless rural workers have been protesting the Bolsonaro regime’s complicity in destructive fires in the Amazon basin). 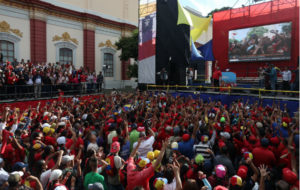 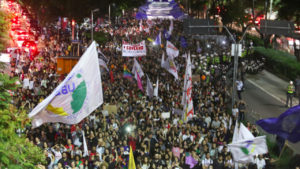 Students and other protest Bolsonaro

Two things however are of note, and perhaps are related: Media in the US have been virtually silent about most of these, covering only protests in Hong Kong, Nicaragua and Venezuela that fit into the US establishment narrative that China, Venezuela and Nicaragua are tyrannies that oppose the US and deny freedoms to their own people. Second, protests in the US have steadily diminished in size, scope and intensity as Trump’s third year in office drags on. People used to lament that Obama had somehow lulled the peace movement to sleep, but what’s the excuse now? Apparently mesmerized by Trump and the lengthy quadrennial presidential campaign, augmented by the jaw-dropping self-incrimination by 45 and his closest associates like his lawyer Rudy Giuliani and his interim chief of staff Mick Mulvaney, people in the US seem not to take the lessons of “people power” resistance in other countries to heart — that millions of people in the streets putting a stop to “business as usual” can drive out the most reactionary regimes. What spark will it take to ignite a prairie fire that will consume the grotesque abuses by the state and corporate elites in this country? When even Bernie Sanders is singing the official tune about popularly elected President Maduro as a “tyrant,” it is clear that the spark must come from below, from the grassroots. But it will take overcoming the grip of white supremacy, settler colonialism, and class collaboration. 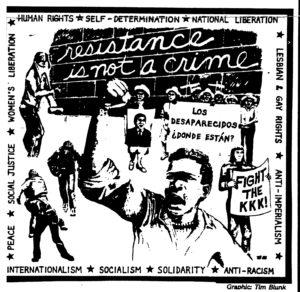 It is probably not a coincidence that one of the few media outlets with an inkling of the righteous but inchoate discontent of masses of people around the world and in the US — Pacifica radio — is being throttled and neutered at this crucial moment. Under the guise of a financial emergency, Pacifica pulled its New York station, WBAI, in the largest and most influential media market in the US, off the air, replacing the station’s own programming with safe gatekeepers like Ian Masters, Thom Hartmann, Democracy Now! with Amy Goodman, Jon Weiner’s “Trump Watch,” Sonali Kolhatkar and others. Although the open leaders of this self-destructive coup have come from KPFA in Berkeley and KPFT in Houston, a lot of the sanitized programming is coming right out of KPFK here in Los Angeles, where the purging and replacement of more radical voices and “think globally, act locally” grassroots activists has already taken place without having to shut the station down. Instead, there has been a long descent into diminished relevance and endless fund drives. Unless this is reversed, the chances of KPFK, WBAI and the rest of Pacifica and its community radio affiliates acting as a magnifier and amplifier of the voices of effective, authentic resistance in the US are slim to none. Since the new head of NPR comes openly out of the US state propaganda machine (Voice of America, Radio Marti, etc.) it is vital that Pacifica be preserved as a platform for the voices of dissent and solidarity, of resistance and liberation, not circumscribed by the political spectrum limited to the Democratic Party and the “former” CIA agents and operatives who think they can do a better job of running the empire than Trump. If you are interested in getting involved in preserving anti-imperialist, anti-capitalist and anti-oppression voices on your airwaves, please contact me at [email protected], or check out the website of the Grassroots Community Radio Coalition at www.gcrc-socal.org.