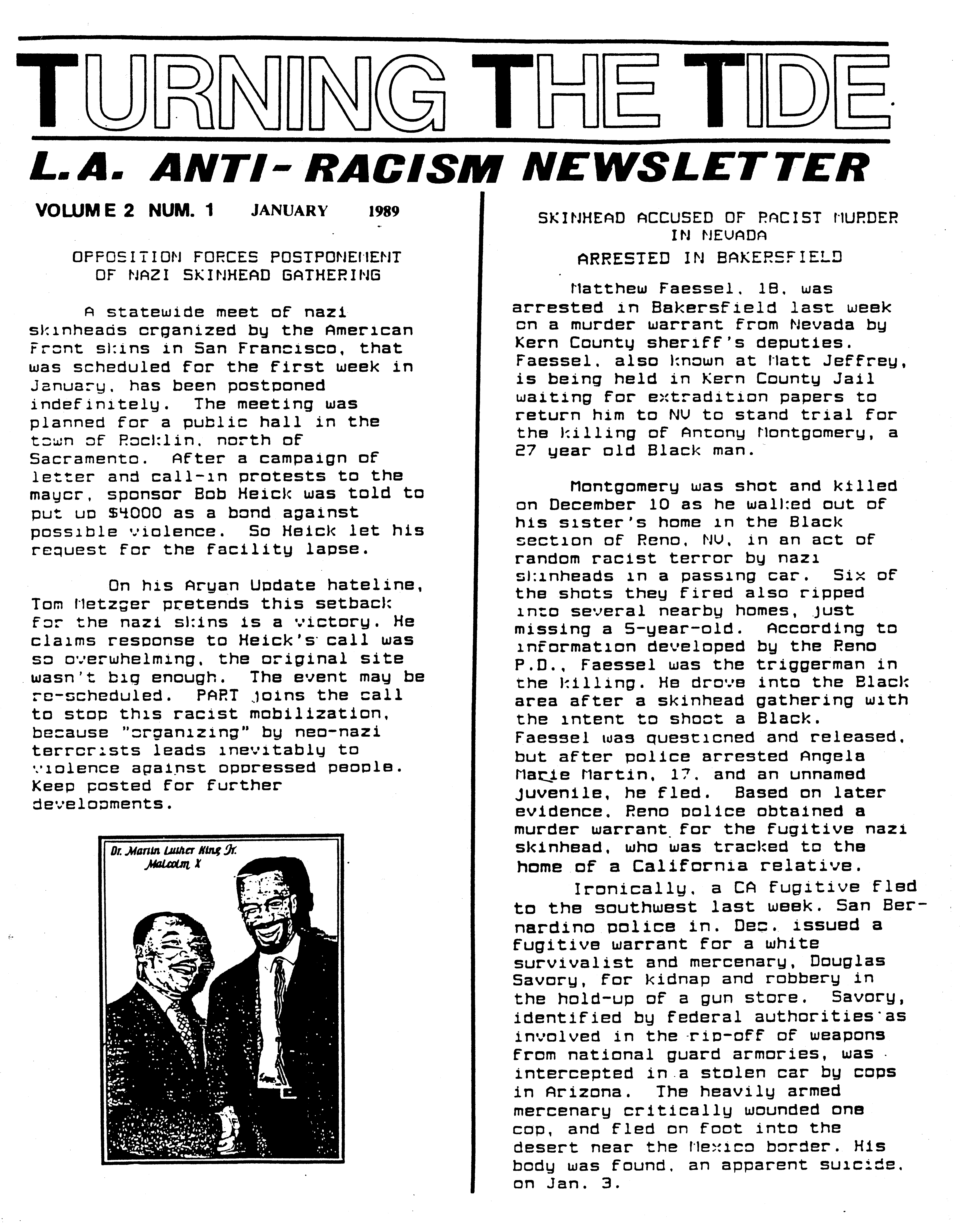 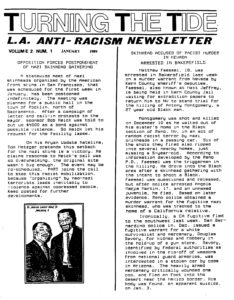 A statewide meet of nazi boneheads organized by the American Front skins in San Francisco, that was scheduled for the first week in January, has been postponed indefinitely. The meeting was planned for a public hall in the town of Rocklin, north of Sacramento. After a campaign of letter and call-in protests to the mayor, sponsor Bob Heick was told to put up $4000 as a bond against possible violence. So Heick let his request for the facility lapse.

On his Aryan Update hateline, Tom Metzger pretends this setback for the nazi skins is a victory. He claims response to Heick’s call was so overwhelming. the original site wasn’t big enough. The event may be re-scheduled. PART joins the call to stop this racist mobilization, because “organizing” by neo-Nazi terrorists leads inevitably to violence against oppressed people. Keep posted for further developments.

SKINHEAD ACCUSED OF RACIST MURDER IN NEVADA ARRESTED IN BAKERSFIELD

Matthew Faessel, 18, was arrested in Bakersfield last week on a murder warrant from Nevada by Kern County sheriff’s deputies. Faessel, also known at Matt Jeffrey, is being held in Kern County Jail waiting for extradition papers to return him to NV to stand trial for the killing of Antony Montgomery, a 27 year old Black man.

Montgomery was shot and killed on December 10 as he walked out of his sister’s home in the Black section of Reno, NV, in an act of random racist terror by nazi skinheads in a passing car. Six of the shots they fired also ripped into several nearby homes, just missing a 5-year-old. According to information developed by the Reno P.D., Faessel was the triggerman in the killing. He drove into the Black area after a skinhead gathering with the intent to shoot a Black person.

Faessel was questioned and released in NV. But after police arrested Angela Martin, 17. and an unnamed juvenile, he fled. Based on later evidence, Reno police obtained a murder warrant for the fugitive nazi skinhead, who was tracked to the home of a California relative.

Ironically, a CA fugitive fled to the southwest last week. San Bernardino police in Dec. issued a fugitive warrant for a white survivalist and mercenary, Douglas Savory, for kidnap and robbery in the hold-up of a gun store. Savory, identified by federal authorities as involved in the-rip-off of weapons from national guard armories, was intercepted in a stolen car by cops in Arizona. The heavily armed mercenary critically wounded one cop, and fled on foot into the desert near the Mexico border. His body was found, an apparent suicide. on Jan. 3. 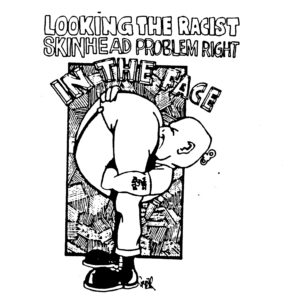 Several neo-nazis were convicted of hate crimes in the past month. In Orange County, former nazi skinhead Gary Skillman was found guilty of a cross-burning on the lawn of the former headof the NAACP and his familg. Alvin “Ted” Heissler, victim of the racist attack. expressed satisfaction that Justice had been done in the incident, but reported that his wife and children were still suffering the consequences of the terrorist action.

Also in Orange County, three nazi skins were sentenced to prison for the brutal and nearly fatal beating of two gay men in Laguna Beach. For smashing their victims with a lead pipe and their steel—toed boots, requiring more than 80 stitches in one man, the three were convicted of charges including assault with a deadly weapon and violating the gay men’s civil rights.

Meanwhile, in San Diego, a teen runaway from L.A. was convicted for his part in vandalizing a Jewish temple with swastikas, nazi slogans, and Bible quotes. Also in San Diego. another runaway, from Florida. was arrested for a skinhead attack on the House of Israel cultural center in that city’s Balboa Park, where a number of gay men have recently been shot to death.

Here in Los Angeles, nazi Stan Witek will be sentenced on Feb. 6, following a sanity hearing, for his part in a 1983 cross-burning in the San Fernando Valley carried out by Tom Metzger and several members of the racist underground “Order” and the Aryan Nations. Metzger and a several associates have a pre-trial hearing on January 23, Division 40 of Municipal Court, on felony conspiracy and misdemeanor charges still pending in the 5 year old case.

Since PART started its anti-Klan hotline as a resource against racism several months ago, we have received many calls from supporters and friends with questions and information. Almost immediately, however, the phone number also became the target for vile and hateful calls. full of racist diatribes and death threats. from a series of white racists, mostly anonymous and cowardly. This material has been recorded. and opens the perpetrators to prosecution.

One particularly deranged individual. sounding suspiciously like the voice of WAR’s local hate-line in Canoga Park, poured a stream of crazed invective into the phone until someone else (possibly his mother?) picked up the line on his end to use the phone.

Shortly after we publicized the hot-line. Tom Metzger gave the number out on his racist Aryan UpDate, identifying PART as a target for his followers, and we got several racist calls and letters from as far afield as Maine and Michigan. The big cheese himself, Tom Metzger, even called up to tell us he heard we were “coming out against him.” We knew these racist terrorists were cowards and bullies, but these calls are probably a new low.

WARY is the latest renaming of the Aryan Youth Movement (AYM), formerly the white Student Union (WSU). The new name signifies its complete consolidation to Tom Metzger’s WAR organization, which began a few years ago when Metzger’s son John took over the WSU from founder Greg Withrow. (Withrow later had a change of heart and abandoned racism and the WSU. For his “betrayal” of the cause, withrow was beaten and nailed to a board crucifixion style by racist thugs, including a number of nazi skins.) 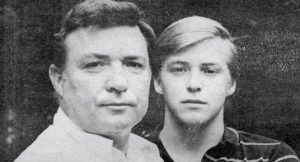 In its various guises, this racist youth group espouses rhetoric even more vile and violent than its parent groups, calling for a bloody, genocidal racial revolution, and not masking its hatred of Blacks, Jews, Latinos or Asians (except when on TV before a mass audience). WARY uses racial slurs and curses in all its propaganda, which it has repeatedly broken into area schools to distribute, often during Christmas holidays or Martin Luther King Day.

This “think tank”, now based in Costa Mesa, is one of a host of organizations that have been funded by anti-Semite Willis Carto, publisher of the Spotlight and propagandist for U.S. neo-nazis. The IHR questions the extermination of 6 million Jews among untold other victims by Hitler’s Germany. Its claims to academic investigation shelter many whose denial of the Holocaust swiftly becomes an apology for and then an acclamation of this genocide. IHR spokespeople have participated in the world Aryan Congresses along with representatives of the most militant klan and neo-nazi groups. 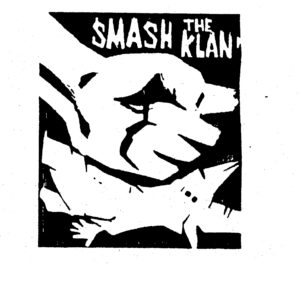 This innocent-sounding group is another of Carto’s brain—children, and many of its local and national leaders come out of the KKK and the most racist elements of the George wallace American Independent Party. Long—time racist Dennis Hilligos, the contact person for the L.A. chapter, was the Van Nuys based leader of Robert Shelton’s United Klans of America in the 70’s. The Populists’ 1984 presidential candidate, Christian rightist Rev. Bob Richards resigned when he realized what a rat’s-nest of racists he had wandered into.

The JDO shares the anti-Black and anti-Arab sentiments, and the tendency to violence, of the Jewish Defense League from which it splintered. The split is attributed to personality clashes between JDO chief Mordecai Levy and JDL honcho Irv Rubin. The JDO seizeson every incident of anti-semitism by the nazis to proclaim the need for arming Jewish youth. It runs para—military weapons training for young Jews in L.A. and other cities. Levy likes to be shown on TV training people in the use of UZI’s and semi-automatic weapons.

CATALOG OF ANTI-RACIST ORGANIZATIONS AND RESOURCES

It’s vital to recognize that not all skins are racists or nazis. One of the most promising and important developments among skinheads is the growing opposition to the neo-nazis within the lifestyle. Groups like Skin Heads Against Racial Prejudice (SHARP), which has affiliates in L.A., Santa Barbara, Denver, and elsewhere around the country, are giving an organized voice to the progressive sentiments of the majority of skins.

A member of SHARP in L.A. pointed out to PART that the skinhead scene first developed as a positive response among white working class youth to Black music and culture. “Some of the first skins were Black,” he says,” and the early white skins were all attracted to ska and reggae as socially progressive music.” The nazi skins, whom he refers to as “bald racists”, came along later, and split the scene into different camps. “A lot of them were never really skin-heads, but Just attached themselves to the scene to exploit and try to recruit people who are ignorant of its true origins.” 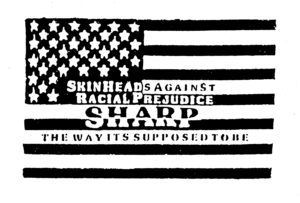 Many of the skinhead groupings nationally and locally, like MAD Skins, refer to themselves as ”two tone” skins — incorporating Black and white members, as well as Asians and Hispanics — and espouse racial harmony. You can get in touch with SHARP through PART until they get their own mailing address.

Be PART of the solution!

TURNING THE TIDE, L.A.’s anti-racism newsletter is now going out free to many of you based on your interest in the cause of equality and Justice. But it takes money to continue to produce this newsletter. we’re asking for your support. To continue receiving TTT, please send your donation —— $2.50 in the Form of stamps or coin or a postal money order made out to ”Boxholder, P.O. Box 10488” —- for one year’s subscription to the newsletter. If you can’t afford that, send what you can, or at least send in the coupon letting us know you want to stay on the mailing list

Other ways you can become PART of the solution are to send us news and clippings about racist and anti-racist activity in southern California and elsewhere, and to let your friends and co—workers know about and the problems PART is trying to address.’ We are planning a number of campaigns. We want local schools to be on the alert for break-ins and other propaganda distribution by nazi skin—heads and other aggressive racists. and we want to go into the schools to help educate young people to the dangers of racism before they are drawn into such groups.

[ ] I want to set up a house meeting with PART or have a speaker at my class or group.