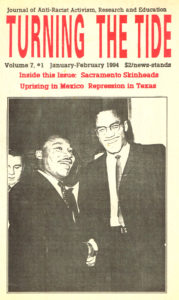 by Michael Novick, People Against Racist Terror (PART) from p. 1 of the issue

Axl Rose, lead singer of Guns N’ Roses, has introduced convicted mass murderer Charlie Manson to a generation of young fans. Over the objections of other members of G N’R, Rose included a version of a song by Manson, “Look at Your Game, Girl,” on their new album, “The Spaghetti Incident.” Audible on the album after the unlisted song is Axl heaving a sigh and saying, “Thanks, Chazz.” 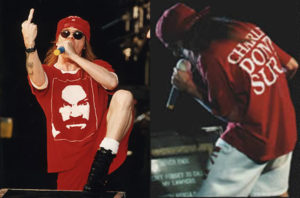 Manson stands to earn $62,000 for every million copies of the album sold. Thankfully, the album seems to be sinking swiftly in sales.

Most of the controversy over the recording has focused on Manson’s leadership of the group that killed actress Sharon Tate, then pregnant, and six others in 1969. He was convicted of seven counts of murder and two conspiracy charges in that case, and separately found guilty of murdering a stunt man and a musician himself. The Doris Tate Crime Victims Bureau, named for the actress‘s mother, has called for a boycott of Geffen Records.

But did you know about Manson’s nazi beliefs and practices both prior to and after his arrest for the Tate mass murder? Manson has often been photographed with a self-inscribed swastika tattoo. His avowed purpose in planning the killings was to blame them on Blacks and try to foment an apocalyptic race war. Even inside prison, Manson continued to associate with neo-nazis. 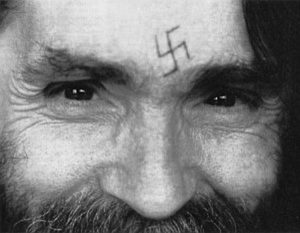 In 1982, Manson was visited repeatedly at Vacaville prison by northern California nazi leader Perry “Red” Warthan. Warthan shortly thereafter killed one of his own teen-age followers, Joe Hoover, after Hoover admitted that he and other members of Warthan’s band had stuffed racist flyers into lockers at Oroville (CA) High School. Support for Manson was part of Warthan’s program in seeking to organize a group of youthful neo-Nazis. In June, 1983 he was sentenced to prison for murdering Hoover, whom he called a race traitor and informant who deserved to die.

Manson’s earnings from the G N’R song are supposed to go to the son of one of his victims, under the terms of a 1971 court order. But Manson has pocketed most of the money he has made over his years in prison, including tens of thousands of dollars for interviews, and cash sent in by his supporters and fans.

Ignoring his nazism, Satanism and mass murders — or perhaps glorifying him because of it — young fans have made Manson a cult ﬁgure, and exploitative entrepreneurs have rushed in to make a quick buck with Manson-themed gear. T-shirts and even children’s clothes are available. Some are bootlegged, but at least one, which Axl Rose popularized by wearing on Guns N‘ Roses’ last tour, is officially licensed by Manson himself. The T-shirt is produced here in southern California by the Lemmons brothers of Zooport Riot Gear in Newport Beach and pays Manson ten cents for each shirt. Dan Lemmons of Zooport told the press, “There’s a good side to Charlie that hasn’t gotten out… Kids today don’t look at Charlie Manson as a mass murderer. He’s like a rebellious figure.”

Perhaps it is the neo-nazi nature of Manson’s rebelliousness that makes him such an appealing figure to the Lemmons brothers. They are giving a “a good chunk of the proceeds” from the Manson shirt — they won’t say exactly how much — to Operation Rescue, Randall Terry’s fascistic anti-abortion group. 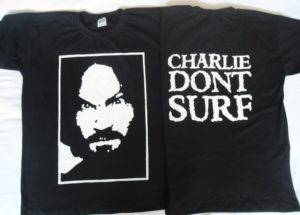 In defending the shirt, which shows Manson and the slogan “Charlie Don’t Surf,” Lemmons said to the San Francisco Examiner, “People get all worked up over some murders that happened almost 25 years ago.

Why not be concerned with the babies who are murdered in the U.S. every year,” referring to his anti-abortion beliefs. He also referred to Manson as a philanthropist and environmentalist. Manson’s environmentalism is probably akin to the anti-immigrant, “preserve the white-man’s land” variety preached by neo-nazi Tom Metzger.

Axl Rose and Guns N’ Roses were promoted heavily by Metzger and WAR (White Aryan Resistance) when, on an early album, they recorded lyrics attacking gays and immigrants. Rose claimed at the time that he was only singing, and that his views were not racist. But with the flap over Manson, and his promotion of

the shirt which benefits both neo-nazi murderer Manson and the Christian-fascistic Operation Rescue, Axl Rose’s true colors are showing through.

What is the justiﬁcation for a musician glorifying a man who killed a musician? What is the hypocrisy of abortion opponents promoting a man whose followers stabbed a pregnant woman to death, killing her after she pleaded for the life of her unborn child, stabbing her in the abdomen with a fork? What is the popularity among young rock fans of a man whose nazi associate murdered a teenaged band member for confessing to circulating racist flyers? This is the sinister appeal of the irrational that promotes what Wilhelm Reich referred to as “the mass psychology of fascism.” It is rooted in racism, hatred of women’s independence, and a desire for fascist authority disguised as “rebelliousness.”

Only an intense cultural and social struggle among young white people will overcome these unhealthy tendencies.

Thanks to Torn Burghardt and BACORR for research assistance with this article. 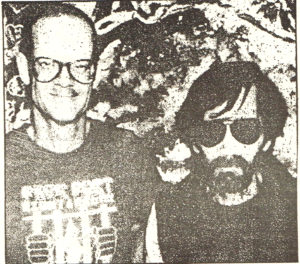 1983 Photo and caption from Oroville newspaper: MANSON AND HIS NAZI FRIEND:

A familiar face and one soon to be familiar: Charles Manson, right, is the notorious California murderer now in prison in Vacaville for the Sharon Tate slayings. Next to him is  Perry Bernard “Red” Warthan, jailed last week in Oroville in the murder of 17-year-old Joe Hoover. Police say the victim was one of several teen-age followers of Warthan, who proclaimed himself a Nazi and an admirer of Manson as he sought to foment race hatred in the isolated Northern California community. Hoover was slain alter he informed on Warthan.