Fascism is Built from Above and Below 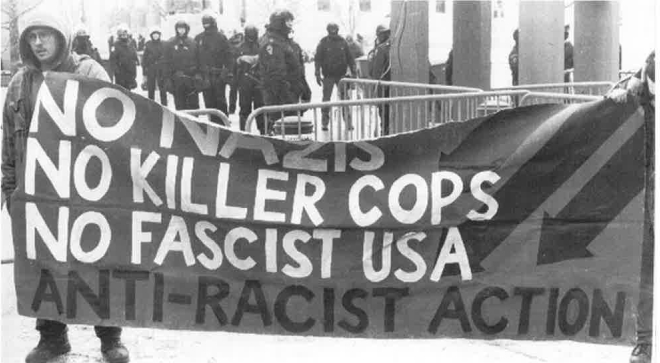 Those inclined to heave a sigh of relief and let down our guard about the threat of fascism because of Trump’s failed Beer-Hall-Putsch of a coup attempt on January 6, or the “peaceful transition of power” on January 20, or by the eventual tracking and arrests of many of those who broke into the Capitol, or by the prospect that having been impeached a second time, Trump himself may be convicted and prevented from holding further public office, need to think again. Much more is demanded of us than simply “pressuring the Biden administration” to adopt more progressive positions.

The array of cold warrior retreads and apologists for endless war and even torture in the incoming foreign policy and national security team should make it clear that resistance must continue and even intensify. The mock resistance offered by the Democratic Party during the Trump-Pence regime will no longer be operative now that the Democrats are in control of the White House and both houses of Congress. That means real  resistance, protracted struggle for liberation, must step forward. That begins with maintaining our political independence and our self-reliant research and analysis, not depending on state or corporate propaganda machines. Trump’s lies were blatant, obvious and easy to discern and discredit. The current crew and their more sophisticated lies will not be so easy to parse.

While there are many desirable actions being taken by the incoming administration, based on the stated recognition that COVID-19 is real, potentially deadly, and a huge, unrelenting problem, especially steps in regard to ramping up testing (including rapid antigen testing, which is far preferable to the faulty and often incorrect PCR testing that has mostly been used so far), as well as invoking the Defense Production Act to mandate private resources to focus on COVID-19 health and safety supplies, tests, treatment, and PPE, there are some very dangerous provisions in Biden’s executive orders under the aegis of “national security”.

The advisory document released by the White House declares: “Biological risks are increasing and accelerating due to a variety of trends, including zoonotic diseases that spill over to humans; a changing climate; and advances in technology that make it easier, cheaper and faster to make and modify dangerous agents. In addition, COVID-19 outbreaks are likely to occur in the US and globally for years even after the introduction of a safe and effective vaccine. During the Biden-Harris Administration, it is likely that other biological events – including the potential for another high consequence or pandemic event – will occur. The US must strengthen its capacity to swiftly counter potentially catastrophic biological events.”

You can read the framework of the Biden-Harris response here:

If you scroll down towards the very bottom, about pp 195-200, you find that Biden also sees himself as a war-time president (without declaring it openly as Trump buffoonishly did). Without called COVID-19 the “China virus” as Trump did, Biden is continuing to identify China as an adversary and the potential source of biological threats.

Here are some excerpts from Biden’s executive order:

“review… and develop… priorities for multilateral fora aimed at reducing the risk of deliberate or accidental biological events [emphasis added]; combating antimicrobial resistance; and fighting climate change as a driver of health threats; and

“(iv) develop, in coordination with the Secretary of State, the Secretary of HHS, the Administrator of USAID, the Director of the CDC, and the heads of other relevant agencies, protocols for coordinating and deploying a global response to emerging high-consequence infectious disease threats. These protocols should outline the respective roles for relevant agencies in facilitating and supporting such response operations, including by establishing standard operating procedures for how USAID and the CDC coordinate their response efforts.

“(b) … promptly develop a plan for establishing an interagency National Center for Epidemic Forecasting and Outbreak Analytics and modernizing global early warning and trigger systems for scaling action to prevent, detect, respond to, and recover from emerging biological threats. …

“(d) To assist in the Federal Government’s efforts to provide warning of pandemics, protect our biotechnology infrastructure from cyber attacks and intellectual property theft, identify and monitor biological threats from states and non-state actors [emphasis added], provide validation of foreign data and response efforts, and assess strategic challenges and opportunities from emerging biotechnologies, the Director of National Intelligence shall:

“(iii) In coordination with the Secretary of State, the Secretary of Defense,…and the heads of other relevant agencies, promptly develop … an analysis of the security implications of biological threats that can be incorporated into modeling, simulation, course of action analysis, and other analyses.”

Other aspects of the executive orders provide for additional “research” into pathogens, which in the past, through so-called “gain of function” studies, essentially weaponized existing pathogens in bats and other wildlife, to enable them to cross over into other species, including humans. Under the guise of combating potential biological weapons or natural mutations, this amounts to dangerous and illegal bio-warfare research.