losangeles Posted on May 16, 1989 Posted in anti-fascism, Michael Novick, Volume 2 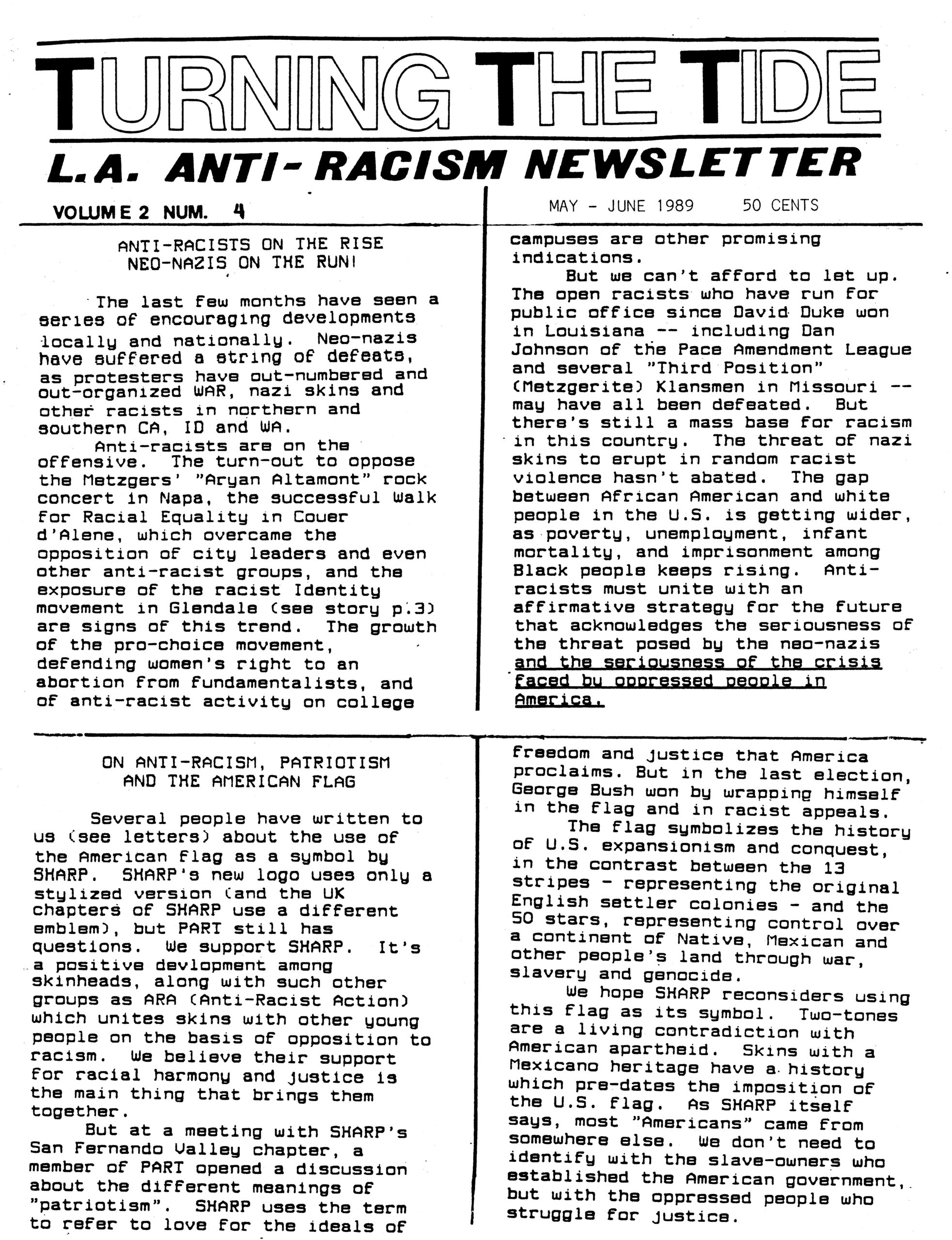 A gathering of the Christian Identity movement called for April 28-30 in Glendale by Escondido based “pastor” Robert Record shut down a day early, after PART exposed the racist nature of the meeting and called for a demonstration.

Christian Identity is a racist theology that claims “Aryans” are the true Israelites and god promised America to the white man in the Bible. It refers to Jews as the spawn of satan and considers Black people ”pre-Adam,” sub—human.

Christian Identity “ministers” include Richard Butler, head of the Aryan Nations, and Thom Robb, the “chaplain” of the KKK.

After PART issued a leaflet and press release exposing Identity’s links to the Klan and neo—nazis, Record tried to deny he and his cohorts were preaching racism. But at least two of the scheduled speakers —— Dan Gayman of Missouri and Karl Schott of Spokane Washington, were identified as notorious racist organizers (by Klanwatch and the Northwest Coalition against Malicious Harassment respectively).

Although Record and his group shut down and left town a day early on the recommendation of the Glendale police, demonstrators gathered as scheduled on Sunday, April 30 at 1:00. outside the Masonic temple where Identity had gathered. Two dozen members of SHARP (Skinheads against Racial Prejudice) joined others from PART, ACT—UP L.A., the International Music workers Union and a number of concerned Glendale residents in a spirited picket line. About 80 Glendale cops looked on from across the street, taping and photographing the participants.

The demonstration drew front page coverage in local papers and TV news that emphasized the racism of Identity. The Masonic Temple, which hadn’t realized the true nature of Record’s gathering, tried to return his money and close the gathering, and isn’t expected to allow a repeat of the gathering, which went off last year without a protest.

TOGETHER EMPOWERED AGAINST CRIMES OF HATRED (“TEACH”), a coalition in the Long Beach—Harbor area, held an organizing teach—in on April 8th at the Grant African Methodist Episcopal Church. The groups involved are troubled by a series of incidents that indicate a growth of hate crimes in the area — including nazi skinhead break—ins and grafitti at local Junior high schools, gay—bashings and attacks on gay-owned businesses, racist and anti-Semitic violence at teen dance clubs in Long Beach, and the arrest of a man in combat fatigues for threatening to shoot up an elementary school.

A speaker from PART recalled a history of racism and KKK activity in Long Beach going back to the 1920s, when LB was a center of Klan organizing in California, and several waves of racist terror in the early and mid 80’s, including cross—burnings, vandalizing and bombing of Jewish businesses, homes and temples, and the neo-nazi activity of an editor of the student newspaper at L.B. Harbor College.

“Such violence ebbs and flows. When we oppose it, the racist cowards retreat. When we grow complacent, they advance and seek to intimidate. But racism won’t be eradicated until we unite and engage in an affirmative struggle for Justice and end to oppression.”

TEACH includes representatives of PART, New Jewish Agenda, the LB Rainbow Coalition, ACT—UP L.A., Students for Peace and Justice at Cal State Long Beach and other concerned residents. It is building a  grass—roots coalition for communication among groups victimized by the neo—nazis, and outreach and education to young people and neighborhood groups to prevent the growth of the hate groups. It can be reached through PART.