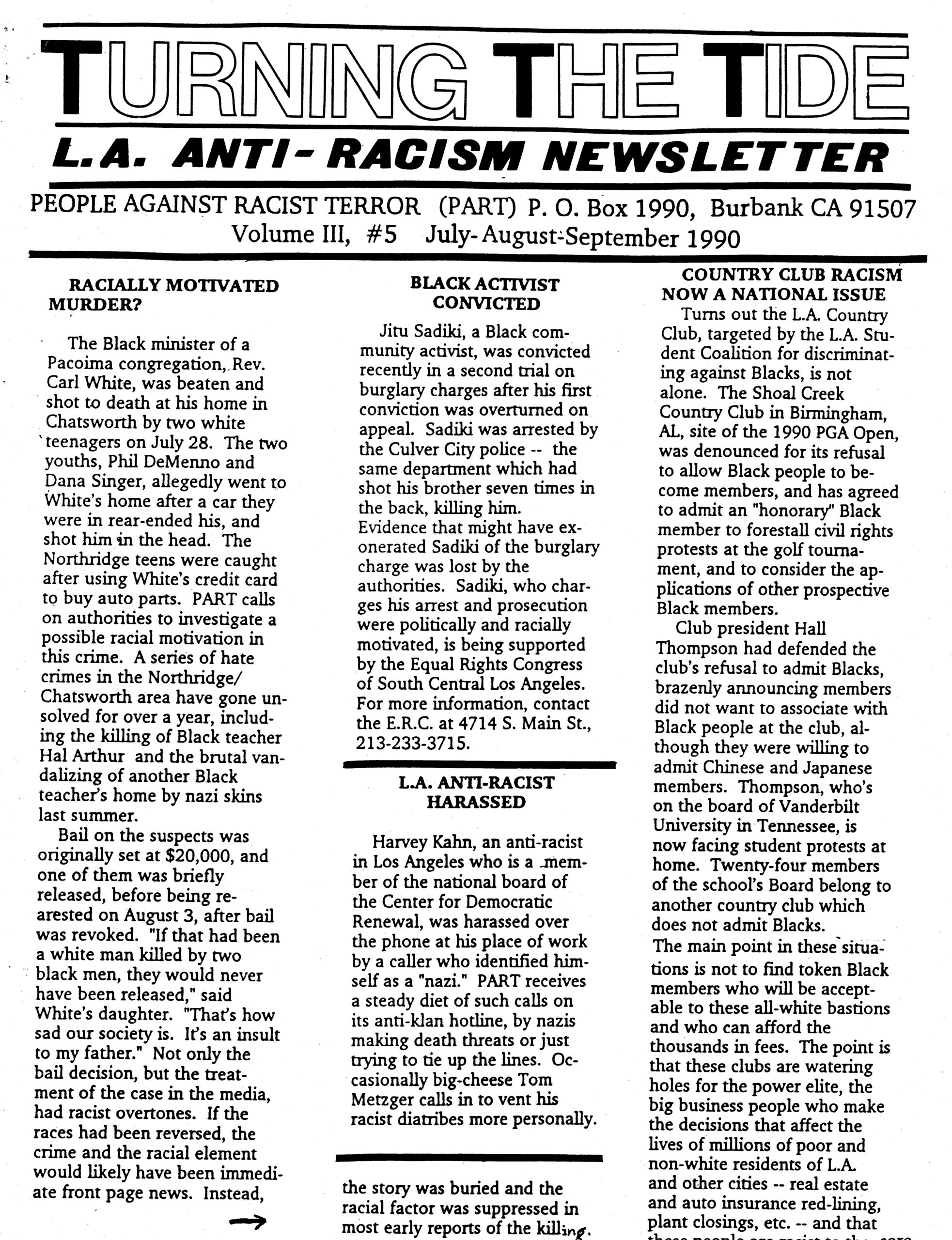 You’re relaxing on the couch, finishing a cold one. The game’s over early, and you punch channels idly on the cable box, looking for something to watch.  What’s on?   Pete Wilson, talking to no one about nothing in particular. Must be C-SPAN.  MTV’s got the same old same old, a new music video with soft core s&m.  HBO has a rerun of “Jewel of the Nile.”  Wait a minute — what’s this?  Looks totally bizarre.  The screen shows a benevolent looking man, a straight arrow in a hairpiece and a three-piece suit, sitting there with two rough looking skinheads in metal studded black leather.  The camera pans in on the straight dude. In a well-modulated voice, slightly smarmy voice, he intones:

“Welcome.  The show is “Race and Reason”, and I am your moderator, Tom Metzger.”

Through the looking glass.  The skins proceed to talk about racial purity and the gripes of white youth with this old guy who might be a skinhead himself, except he’s wearing a rug.

What is this show?  They may call it “Race and Reason,” but Racist Outrage could be closer to the mark.

In fact, this is no ordinary talk show, cultivating controversial guests for the ratings, and Metzger is no ordinary talk show host – he’s the former Grand Dragon of the Ku Klux Klan in California.  He now heads White Aryan Resistance (WAR), which produces the show.  He’s on trial in Portland OR for fomenting some of these nazi skins to kill an Ethiopian immigrant.

His TV show, “Race and Reason” has put the white supremacist movement into living rooms throughout America on cable-TV community access channels in California, Oregon, Washington, Texas, Georgia, Pennsylvania and northern New York State.  Most recently in 1993-94, the show has aired on cable in Simi Valley in Ventura County and on an Orange County cable system. Metzger’s show has been met by protests everywhere it airs.  Fifty demonstrators picketed Chicago’s Channel 19 when “Race and Reason” debuted.  According to Larry Duncan of the Committee for Labor Access, which produced the “Labor Beat” weekly on Channel 19, Chicago Access Corporation, the franchise holder for several cable channels, had guidelines prohibiting all producers from using obscene or libelous material.  “We told them this was libel against entire communities.  What could be more obscene than fascism?”

But most cable managements maintain they are required by law to air the show.  Metzger claims first amendment protection for his show.  He says that the right of free speech allows him to air his “racial nationalist” views. “Race and Reason” is lower key than most of the propaganda from “WAR”, and is carefully designed to legitimize Metzger.  He calls it “a white man’s talk show.”  Having traded in his robes for a business suit several years ago, Metzger has been re-born as the white supremacist’s Donahue, able to get his message out to the folks he wants to reach in the privacy of their homes.   He has taken a page from Falwell, Swaggart and the other TV preachers, using TV, computers and telephone hot lines to project a 21st century Klan.

On his show, Metzger often avoids the open advocacy of violence and Aryan revolution that he espouses in the newspaper, “WAR”, which he distributes to his followers and racist allies.  But apart from that subterfuge, he does not moderate his own racist and anti-semitic views; he uses the show to elicit such views from his guests.  These have included the bodyguard for the late neo-nazi leader George Lincoln Rockwell, Mike Brown; the late Ben Klassen of the Church of the Creator, who told Metzger that he supported “having any white nation cleansed of alien or mud races”; and Greg Withrow, then head of the White Student Union. Withrow applauded the white high school student in Sacramento, CA who stabbed a Vietnamese youth to death, as the “highest example of white manhood.” Withrow was later crucified to a wooden plank by nazi skins loyal to Metzger’s son John, who took over the WSU and turned it into WAR Youth after Withrow had a change of heart.

Metzger hit on TV as the best way to maintain a public presence for the racist right wing in a period when public Klan activity was on the decline.  The subsequent resurgence of neo-nazi and KKK activity may be based in no small part on that strategy.  Cable TV casts a broad net that draws in new followers and potential sympathizers without exposing them to public identification or attracting much attention from potential opposition. Yet everywhere the show has aired, it has also led to an upsurge in racist violence.  In Sacramento, for example, the skin-head who carried out a reign of racist terror last summer, bombing the NAACP, a synagogue, and several Asian-American targets, first came in contact with Metzger through a TV show, called his hate-lines, ordered WAR, and proceeded to put Metzger’s preachings into practice.

From his home base in southern California, Metzger has complemented the cable shows with the Aryan Liberty Net, a computer bulletin board founded by the Idaho-based para-military Aryan Nations.  This computer system provides telephone access numbers in the midwest, four other regions of the U.S., and in Canada.  It has several levels of password security codes through which the initiated can communicate.  Metzger’s newspaper is distributed to white supremacists nationally. Now, Metzger also runs a network of telephone answering messages, dubbed “hate-lines” by his opponents, around the state of California, and throughout the country, by piggy-backing onto a commercial “voice bulletin board” system which uses digital technology to take messages and store them as computer data.  Other racist groups are now following his lead using the same type of system, to transmit their racist and anti-Semitic diatribes.  Through these high tech means, he urges racists to form cells to carry out “leaderless resistance” — race war violence for which Metzger himself cannot be held personally liable.

We need to step up the heat against the use of cable TV and telephone systems by racists.  While the FCC has been trying to drive all alternative programming off the air, shutting Black radio stations down in California and the Midwest, and labeling gay programming “indecent,” the racists have had a free hand to foment violence through their hate-mongering.