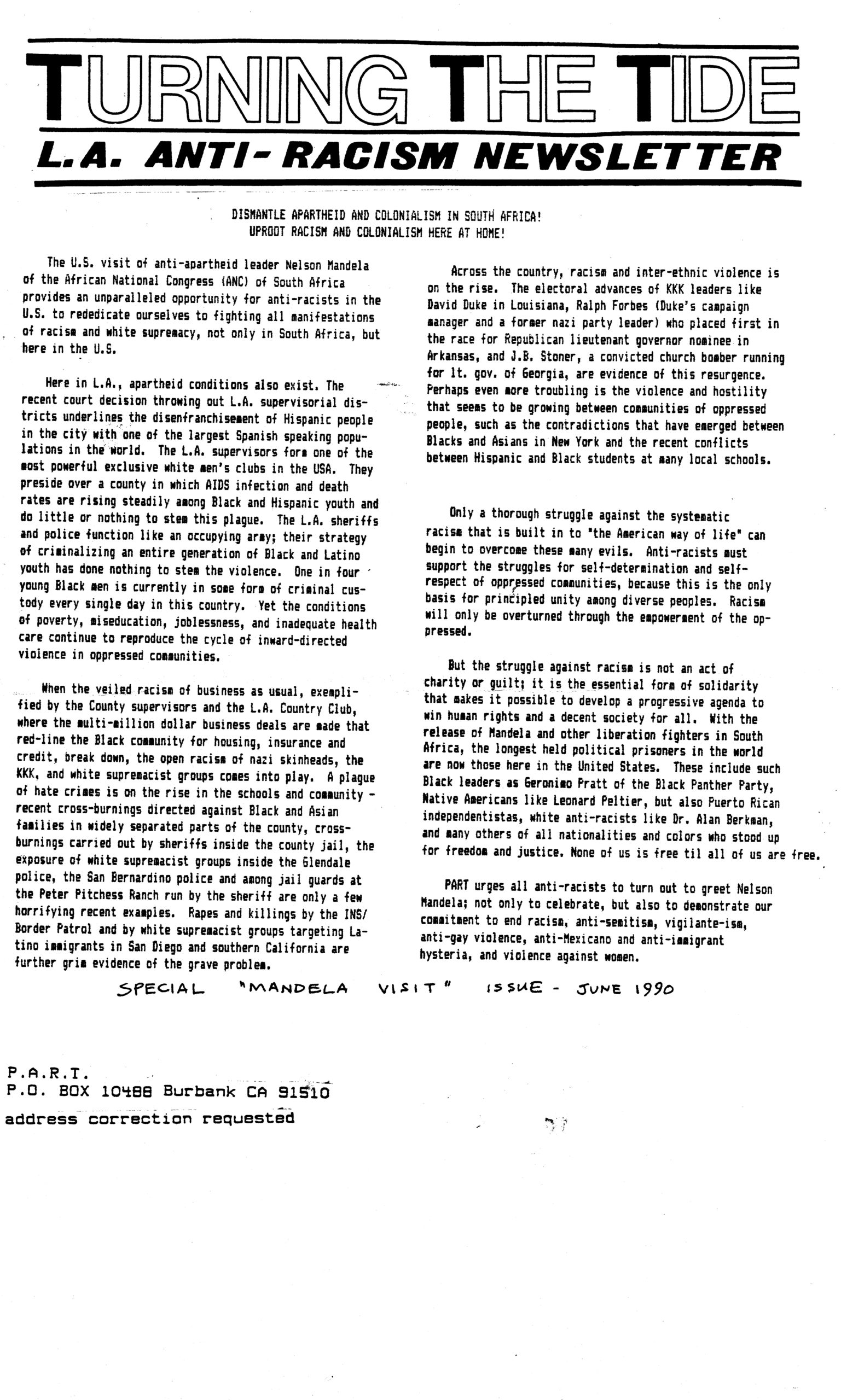 One of our correspondents in Dallas reports that Confederate Hammer Skins, facing sentencing of several members on Federal charges, have inducted 15 new members without waiting through their usual mandated probation period.  Two new neo-nazi groups have formed in the area; the Bawlry Boys and the Confederate White Vikings, who are having some clashes with the C.H.S.  Rumor has it that the American Nazi Party in the area is trying to gather home addresses of anti-racist skins.

I’m a SHARP skin from the batlefields of Dallas.  I’d like to address the letter written about SHARPSkins as ‘fag bashers.’  Skinheads don’t have anything to do with homosexuals because our social lives and ideas of fun differ, not out of hate.  As PART stated, it’s common for nazi boneheads to try to discredit anti-racist skins by wearing their regalia while acting like criminals.  Something similar happened here.  One of our members was convinced by some nazis that a member of ours was a spy.  They knew a lot about him from school and they were very convincing.

Luckily, most of our members knew our friend too well to be tricked.  But this disguise tactic is very common on the nazi’s part all around the country.  But why would a SHARP skin go around wearing easily identifiable SHARP material if they were causing trouble?  It’s too simple.

SHARP condemns the violations of anyone’s rights, no matter what.  Homosexuals are no exception.  Nevertheless, there might be a few bad apples in the SHARP movement who might be confused and who may give us a bad name.  For those few, I say, “Don’t say you love our country and then violate people’s civil rights!  If you “fag bash”, you’re not SHARP.  You’re acting like the nazi stormtroopers of World War II.  If you have a bad opinion of homosexuals, keep it to yourself and lay the fuck off!  And to you nazis who are trying to break up unity by disguises, screw you too!

Hate is always too obvious too hide.

We shouldn’t look at people as Mexican, American, or African but just human.

Respect and love all living creatures. Destroy power, not people!

Hi!  I live in Riverside, but I go to school in Fullerton.  I’m of German descent, but I can’t stand the neo-nazis that constantly litter both cities with their propaganda.  I have a few traditional skinhead friends who get harassed by these Nazi idiots, and it bugs the hell out of me.

We’d like to start something at my school to show that there are skins who are not racist.  We’d like to take a stand against WAR Skins and show them that racial prejudice will not prevail.

Could you please send me info and newsletters? I’ll pass them out through my friends and at my school. If we unite we could definitely make a change!

To those of you at PART:

I’d appreciate it if you’d take me off your mailing list.  I feel it’s a shame that trees must be cut down for your rag to be printed. I’m wondering why I’m even bothering to write and spend my efforts on low lifes such as yourselves.

It amazes me that you are so anti-white.  Why do you capitalize Black and not white?  Are you black supremacists?  Isn’t that racism?  On every single page of your filthy rag I read countless LIES!  You refer to the infant mortality among blacks, the high number of blacks in jail, the low life span of blacks, and so on —  it’s not the white’s fault, it’s the BLACK CULTURE AND WAY OF LIFE!! that brings these problems into their lives.

One thing — do you have the balls to print this? I seriously doubt it!  Why have I never seen a report on black racism?  You make me sick and you are a disgrace to the white race; that is, if you are white.

If you’re all just a bunch of jews and blacks, then I’d expect such whining and stupidity from you.

This issue of T.T.T. will be the last you receive, but as we are printing your letter, and this reply, we thought you might want to see it.

PART is not anti-white OR pro-black.  We are opposed to all forms of discrimination.  But we believe that white supremacy is a fact of world history that has resulted in terrible and systematic atrocities against people of color, and is one of the main bed-rock foundations of most of the oppression and exploitation that goes on.

When you try to dismiss the genocidal conditions that face Black people, Africans in America, you are “blaming the victim.”  We’re not saying that you, personally, are responsible for those conditions, but that you and I and all people, of all colors, have a responsibility to try to change those shameful conditions.  Black “racism” often takes the form of self-hatred, a destructive force within the oppressed community that also needs to be eradicated.

The reason we capitalize Black and not white is that historically “Black” has been used a national identifications for Africans in America, just like Italian or French.  White does not have the same aspect, as there are many different national and ethnic identities for Euro-Americans.

We print many letters we do not agree with.  We think that you raise questions that many well-intentioned people of good will, and we’re sorry that you seem so wrapped up in hatred that you can’t discuss them honestly or seriously.  We are concerned that you originally wrote to us to  get Turning the Tide, expressing concern about nazis in your area, and now you seem to have joined their ranks and bought their twisted world view.  If you ever have any second thoughts, write back.

The ‘zine is really great, I dig all the info it’s packed with, but if I may I’d like to make a small request.  My friends and I are trying to figure out, what the fuck are those little tickets you have in the middle of the ‘zine?  Could you please explain the idea behind it?  I can understand some parts of it, but some of it is too obscure.

Anyhow, keep up the good work, and thanx for your time.

Thanks for your continuing support and encouragement.  The ticket books, which go in to about half the copies of T.T.T. we distribute, are a contribution from a poet, Paul Weinman, from Albany NY, who writes anti-racist poetry in various forms, including the “white boy” tickets that have appeared in different ‘zines and poetry publications.  We felt they provided a different angle on dealing with issues that T.T.T. usually confronts in a more literal way.  You could think of them as a kind of poetic letter to the editor on the contradictions of racism in Black and white consciousness and experience.

We’ll comment further after the next couple of letters.

Thank you People Against Racist Terror — for existing so you will eventually have no need to exist!  For your intelligent, direct exposing of issues, people and groups that engage in racism!  For taking all the trouble to include the White Boy packets!!

This nazi letter was sent to me from Van Nuys, CA.

Use it if you want.  Would you like 400 copies or more of “ZEBRAS”  (the latest ‘white boy’ poems tickets book)?

If so, I’ll be very happy to send them to you.

Thanks for your contributions.  This latest version of the ‘white boy’ ticket book seemed to us a little off the previous though-provoking mark of some of the earlier ones. In particular, a couple of elements that were troubling but interesting in the earlier ones just seemed too pronounced for our taste in this one — that is, the repeated use of “black face” by “white boy”, and it’s result, the beating or bruising of “white boy” by unappreciative white people.

The point for white people concerned about racism is not to become black or to pass or pretend to be Black and certainly not to lecture Black people about how they should be fighting racism or dealing with its effects.

The point is to challenge the government, the corporations, the ingrained racism of our own communities and schools to change, and to change our own behaviors and attitudes.

The level of ambiguity in “Zebras” seems just too strong about some of these issues, about what you are advocating or justifying, especially about what kinds of attitudes about Black people and violence you are sustaining; you seem to depicting Black people as fulfilling a masochistic quest for retribution by “white boy”.  We were uncomfortable with this element in it, to the point where we would not feel right in including it.

You might want to look “Zebras” over again, and compare the tone and content yourself to some of the earlier pieces you sent us, such as the flag burning one, in which “white boy” — that is you, in real life as well as poetry — confronted the white community and power structure.

Anyway, please continue to send us other examples. We had hoped they would elicit a greater response than they have from readers.  The letter above is the only response we have received, and as you can see, it expresses mostly confusion.  We had been hoping that the poem-books would, because of their insightful and inciting aspects, stimulate our readers in ways that a news article or editorial could not.  We still hope so.

We are reprinting below the nazi hate letter sent to you from here in Southern California:

You’re one of the most despicable kikes I’ve ever come across.  I just had the “pleasure” of reading your vicious anti-white comic book “white boy”.  Its fullof the typical anti-white liberal marxist bullshit.

Blaming white people for the black race’s own inborn genetic shortcomings.  Every black social deficiency is due to prejudice and so-called white racism, right, asshole?!

Well, jew-boy you’d better concentrate on your own tribe’s racism.  You jews are one of the most racist people on earth.  We white working people have put up with the likes of you long enough.  We have no guilt or shame for events which may have taken place one or two centuries ago.  We’re not responsible for slavery and apartheid.  On the contrary, white working people are the most exploited and oppressed group of people on the face of the earth.

So on behalf of the racially conscious Aryan white people, we say to you scum kike and all others who defame the white race and its culture and history, Fuck You!

Just say no to race-mixing!

Any time some racist tells you that they just are proud to be white, and they’re not against anyone else just read a letter like this that expresses the true hatred that motivates that so-called “pride”.  Tom Metzger and the “Aryans” that follow his creed hate everyone, Black, Jewish, and “non-Aryan” whites — that is whites who don’t buy their hateful crap — to the point where they intend to exterminate them.

You will not find hate Whitey sentiments or guilt in T.T.T., and in general we try to print dialogues about important issues without dismissing anyone’s beliefs or opinions.  We don’t know why the nazis find that quite as aggravating as they seem to, but judging from the hateful cards and calls we get, they can’t stand it — but they persist in accusing us of the things they themselves are guilty of.  Since we know a goodly number of racists read this newsletter month after month, we suggest to you that you might want to examine a little more honestly what is so irritating to you about it.  If you felt as little guilt as you claim, we don’t think you would react with so much hostility.  Your hatefulness is a measure of the weakness and inadequacy of your own arguments and beliefs in your own heart as well as in reality.