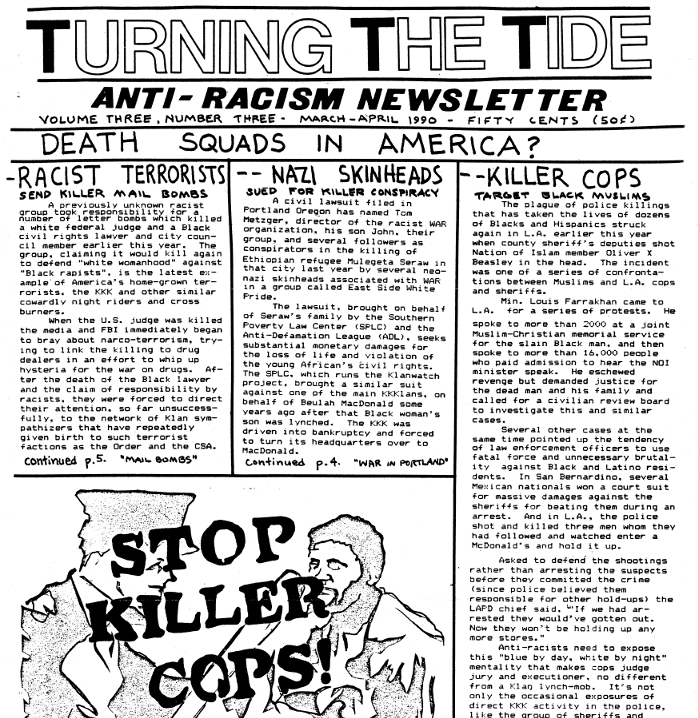 Neo-nazi vandalism is con-tinuing throughout the Southland unabated in the new year.  Several attacks have come to our attention:

*     Several Jewish owned business-es in Encino were spraypainted withswastikas and anti-semitic slo-gans at the end of January.

*     The base of the Santa Susana climbing rocks have been daubed with neo-nazi, Klan graffiti.

If you would like to join PART in painting out racist graffiti, call the anti-klan hotline:213-281-7928.

Attacks on gay men and lesbians are way up and rising.

*     The L.A. County Human Relat-ions Commission notes an increase in anti-gay attacks, mostly brutal assaults in 1989 over ’88 in their latest annual report, from 61 to 81

Four nazi skins pleaded no contest to charges stemming from their attack on a young Iranian couple and their baby in a Laverne supermarket lot last year.  The four who screamed racial epithets at the victims and knocked them down will receive between a month to a year in jail and long pro-bation periods.

Jeff Eskew, a nazi-skin arrested for armed robbery here in L.A. was implicated in a similar hold-up and the vandalism of a Jewish school in the Washington DC area.  Eskew told the DC papers that he had no remorse for the attack, in which thousands of dollars of damage were done to classes and books, because he “did it for Satan.”

Marty Cox, a notorious WAR affiliated nazi skin head, has been busted on harassment charges in Orange County.  Cox was immediately jailed for violating the terms of his probation on previous convict-ions for hate crime activity.

The California Klan held a public rally in robes and hoods in Clovis, CA in January to protest the MLKing Day holiday.

A wave of anti-Asian graffiti in Arcadia schools and neighbor-hoods culminated in a cross burning reported in our last issue.

Racial epithets and threats have met a Black family in Chino Hills, including harassment of the the teenage kids.  Walter Johnson reports the poisoning of his fa-mily’s dog, vandalism of their cars and over Christmas the destruction of power lines to their house.  San Bernardino police discounted a racial motive!

A previously unknown racist group took responsibility for a number of letter bombs which killed a white federal judge and a Black civil rights lawyer and city council member earlier this year.  The group, claiming it would kill again to defend “white womanhood” against “Black rapists”, is the latest example of America’s home-grown terrorists, the KKK and other similar cowardly night riders and cross burners.

When the U.S. judge was killed the media and FBI immediately began to bray about narco-terrorism, trying to link the killing to drug dealers in an effort to whip up hysteria for the war on drugs.  After the death of the Black lawyer and the claim of responsibility by racists, they were forced to direct their attention, so far unsuccessfully, to the network of Klan sympathizers that have repeatedly given birth to such terrorist factions as the Order and the CSA.

Meanwhile FBI efforts have not yet cracked the case, leaving a threat of death hanging over civil rights activists and even the fede-ral judiciary.  The first target of their investigation , whose type-writer was reportedly used for the threats, has become a folk hero to reactionary white southerners.

This is another example of the necessity to take racist terrorists seriously at the earliest possible stage.  If police had responded aggressively to this group’s opening salvo, a smoke bomb and threats sent to the NAACP, it’s possible the killings might never have happened.  Instead, the murders have provoked a series of copycat mail bombs and threats to others.

A civil lawsuit filed in Portland Oregon has named Tom Metzger, director of the racist WAR organization, his son John, their group, and several followers as conspirators in the killing of Ethiopian refugee Mulegeta Seraw in that city last year by several neo-nazi skinheads associated with WAR in a group called East Side White Pride.

The lawsuit, brought on behalf of Seraw’s family by the Southern Poverty Law Center (SPLC) and the Anti-Defamation League (ADL), seeks substantial monetary damages for the loss of life and violation of the young African’s civil rights.  The SPLC, which runs the Klanwatch project, brought a similar suit against one of the main KKKlans, on behalf of Beulah MacDonald some years ago after that Black woman’s son was lynched.  The KKK was driven into bankruptcy and forced to turn its headquarters over to MacDonald.

Hopefully, a similar fate awaits Metzger and WAR in this case which charges that the Metzgers sent WAR agents like Dave Mazzella up to Portland specifically to foment acts of violence against minorities to build the nazi-skin movement and its alliance with WAR.       Testimony already given has indicated that this contention will hold up in court. Metzger is trying to use the case to rally support in the racist right.  He tried unsuc-cessfully to get the ACLU to take up his defense, but the group re-fused, perhaps finally recognizing that the racist’s organizing is not protected political speech but part of a campaign of intimidation and terror.

The plague of police killings that has taken the lives of dozens of Blacks and Hispanics struck again in L.A. earlier this year when county sheriff’s deputies shot Nation of Islam member Oliver X Beasley in the head.  The incident was one of a series of confrontations between Muslims and L.A. cops and sheriffs.

Min. Louis Farrakhan came to L.A. for a series of protests.  He spoke to more than 2000 at a joint Muslim-Christian memorial service for the slain Black man, and then spoke to more than 16,000 people who paid admission to hear the NOI minister speak.  He eschewed revenge but demanded justice for the dead man and his family and called for a civilian review board to investigate this and similar cases.

Several other cases at the same time pointed up the tendency of law enforcement officers to use fatal force and unnecessary brutality against Black and Latino residents.  In San Bernardino, several Mexican nationals won a court suit for massive damages against the sheriffs for beating them during an arrest.  And in L.A., the police shot and killed three men whom they had followed and watched enter a McDonald’s and hold it up.

Asked to defend the shootings rather than arresting the suspects before they committed the crime (since police believed them responsible for other hold-ups) the LAPD chief said, “If we had arrested they would’ve gotten out.  Now they won’t be holding up any more stores.”

Anti-racists need to expose this “blue by day, white by night” mentality that makes cops judge jury and executioner, no different from a Klan lynch-mob.  It’s not only the occasional exposures of direct KKK activity in the police, like the group of sheriffs and M.P.’s in Texas who were recently fired after their KKK recruiting activities became known.  The use of all cops, whatever their color or personal ideology, as an occupying army in marginalized communities of color who have no chance for advancement or dignity in this society, is what leads inevitably to these killings.