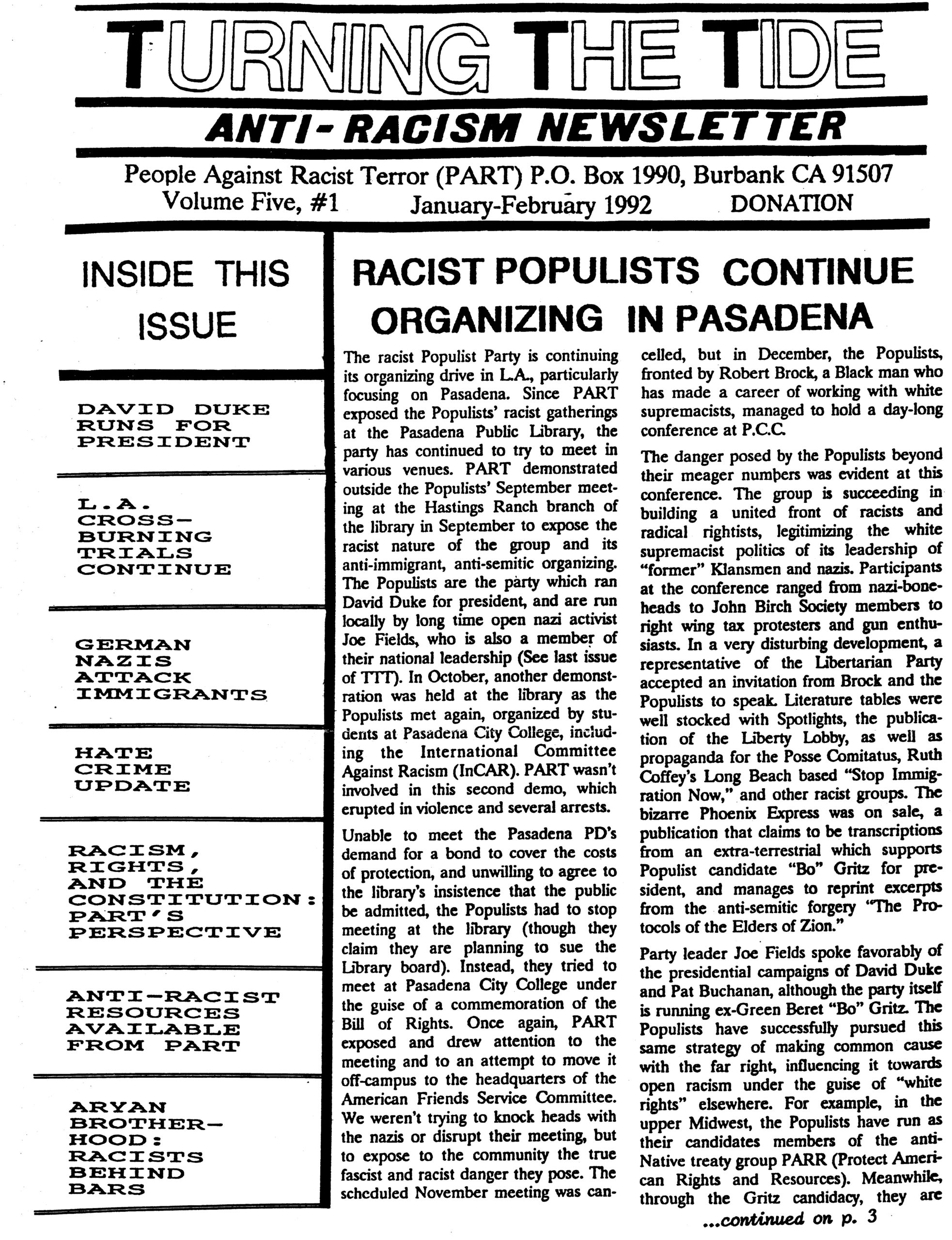 PART’s Perspective: RACISM, THE CONSTITUTION & THE BILL OF RIGHTS

David Duke and the new breed of Klansmen and racists that are equally at home in the Populist,  Republican  and Democratic Parties, like to  claim they are for “equal rights for all,” or sometimes, more honestly, for “white rights.” Often, they claim to uphold the Constitution and the Bill of Rights protections of free speech.

But a closer look and analysis of what these groups are actually saying about the Constitution, and about  which rights they support and which they don’t, is very enlightening.

Simply put, many of these racists are explicit in supporting the Constitution insofar as it existed  before  the  Civil War and the abolition of slavery. They support a Constitution which was predicated on the disenfranchisement of African people, and on strengthening the federal government to take land from Native people and suppress slave insurrections. They support a Bill of Rights which they interpret as upholding the primacy of “State’s Rights.” This is not simply a libertarian or anti-big government position. lt has always been a code word in U.S. history for allowing local governments to function as protectors of a social and economic system of white supremacy.

Many of these groups are quite explicit in their rejection of any other amendments to the Constitution after the first ten. They call for the repeal of the amendment that required free popular election of U.S. Senators, restoring the system where they were selected  by state legislatures (controlled by rural or suburban white enclaves). They reject the post Civil War amendments which gave citizenship and the right to vote to Africans and all people born in the U.S., and which applied the guarantees of the Bill of Rights to all U.S. citizens and limited the powers of the state governments over the  people. They argue that white people  are  the only true citizens, and that “14th amendment” citizens (that is, African people) are inherently  inferior. They claim the amendments were never validly adopted, and they similarly reject the amendments authorizing the income tax or women’s right to vote.

It’s important to understand what these racists are talking about when they say “rights,” because they’re talking a different language than most of us use. Then they use agreement about freedom of speech or the right to bear arms (rights which PART and many fair-minded people uphold) to organize people to their racist cause.

There are valid criticisms of the amendment which made the freed slaves U.S. citizens, for example. Black nationalists see this, not as empowerment, but as making Africans subjects of this government against  their will.  They call for a plebiscite among Africans in America about how they want to govern themselves.

But this is different from the white supremacists, whose so-called Pace Amendment to the Constitution would restrict U.S. citizenship to people of Northern European Christian  descent and expel Africans and others. It’s also different from the growing call from anti-immigrant  groups  dominated by  the racist right and echoed by elected Republican officials like supervisor Mike Antonovich and local congressmember Elton Gallegly to amend the Constitution to deny U.S. citizenship to children born in this country whose parents were undocumented immigrants.

These are far different rights than those intoned by Duke and the demagogues of racism. Libertarians and others who oppose the power of the current federal state need to recognize that the racist concept of “white rights” is a stepping stone to fascism.