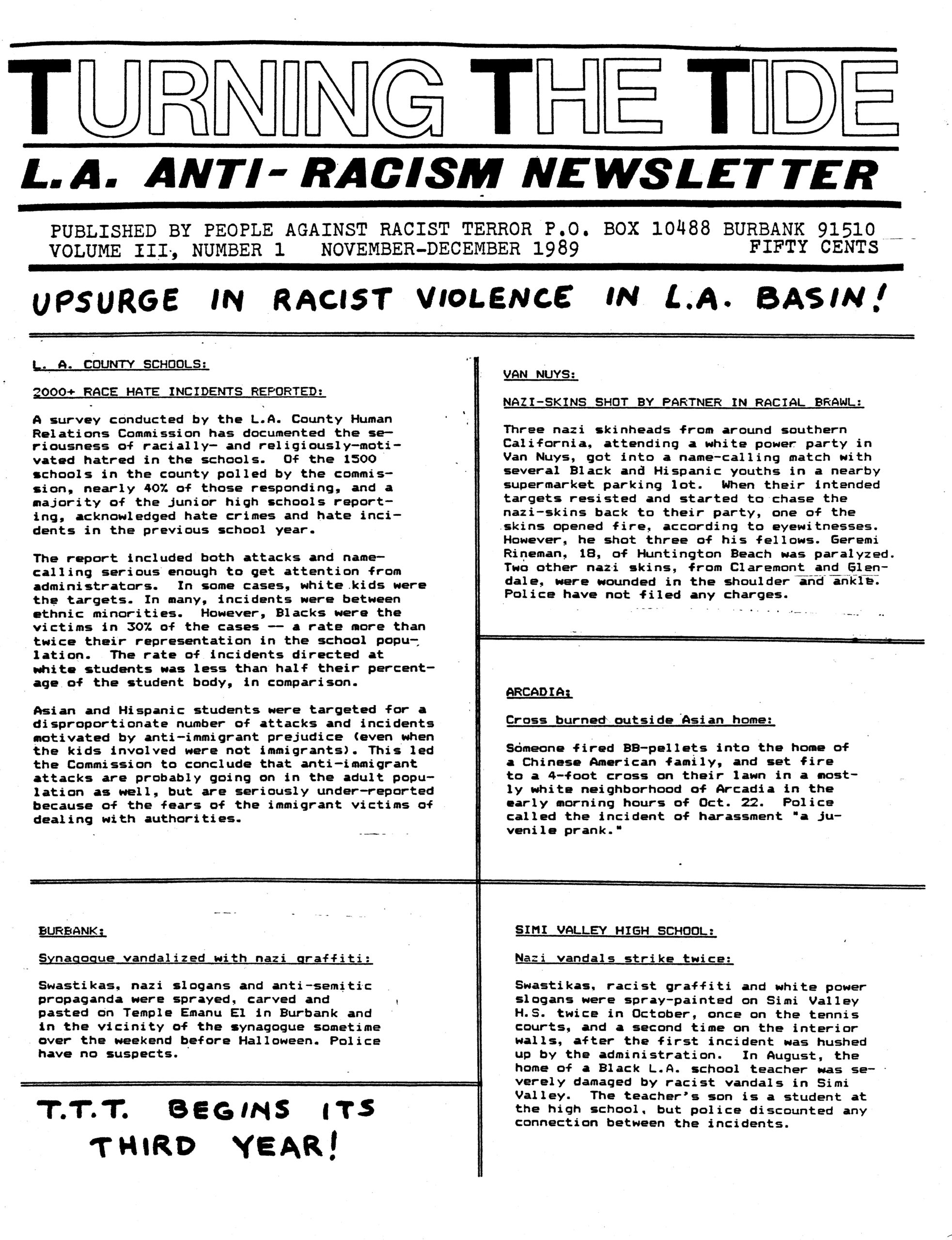 ANTI RACIST RESOURCES (Note: All contact info out of date)

CDR publishes the Monitor, a very good, in-depth magazine analyzing and exposing racist groups and trends.  They have affiliates around the country and offices in the south, midwest and north.  PART shares information about racist activity with them.

This is the local affiliate of an international organization based in the B’nai Brith jewish fraternal organization.  They publish a lot of interesting information, but they tend to work closely with the police and government agencies.  At the mid-west anti-racist skin conference, there was a debate about throwing the ADL out for anti-Arab racism.  The ADL has also denounced other anti-klan groups, using red-baiting.  It has compared Black political prisoner organizations to the racist Aryan Brotherhood.  Deal with them cautiously.

JBAKC is a national anti-klan group currently organizing a “just say no to nazis” campaign focused on racist skins.  They have chapters in S.F., Chicago and N.Y.  Their L.A. chapter folded up a couple of years ago.  PART participates in their John Brown Network, sharing information with other grass roots anti-racist groups around the country.

The SPLC concentrates on legal actions against the KKK and other racists (including inside the police).  They have had a number of notable legal victories in the past year or two, winning major civil suits on behalf of victims of KKK terror and racist violence and forcing Klan groups to pay money damages to the victims.  PART receives Klanwatch Intelligence Report and shares information about local developments.

SHARP is a national network of anti-racist skinheads who remain true to the roots of the skin lifestyle and music.  Jim, the west coast coordinator, is based in the Santa Barbara area, and there is a local chapter in the San Fernando Valley which has contact with “two-tone” skin head groups like the MAD Skins and Mickey Mouse Club.

NAPO is a national organization seeking independence for Black people in the U.S.  They have chapters and run “Malcolm X Centers for Black Survival” in L.A., NY, Michigan, and Atlanta.

NJA is a national progressive Jewish organization involved in anti-racist, anti-intervention and Middle East peace struggles.  In recent years, they have worked jointly with Palestinian groups to support a just settlement, and have supported the Palestinian declaration of independence.

A Journal of Anti-Racist Action, Research and Education

A steady drumbeat of racially motivated violence continues to grow in southern California.  In October, L.A. was the scene of a cross-burning on the lawn of a Chinese family in Arcadia, a fight between several nazi skinheads and some Black and Hispanic youths in which 3 of the skinheads were shot, one critically by one of their own gang members, and repeated incidents of neo-nazi vandalism at a high school in the Simi Valley where the son of an L.A. teacher whose home was brutally vandalized by nazi skins last month attends classes.

Swastikas, racist graffiti and white supremacist slogans were painted on the tennis courts at Simi Valley High School on Oct. 12.  When the school administration hushed the incident up and quickly painted over the slurs, a second round of vandalism hit the school.  Walls were defaced with nazi symbols, anti-black slogans and KKK logos. Police are investigating the possibility of a connection to two earlier attacks in the area.  In May, a synagogue was vandalized, and in August, $20,000 in damage was done in an episode of systematic destruction at the home of Louis Boss, a Black junior high schoiol teacher who lives in the area. Boss’ son attends the school where the latest graffiti were put up.

The same weekend as the latest incident in Simi Valley, a synagog in Burbank was also the target of racist vandals.  Swastikas and nazi slogans and stickers defaced the doors of a temple in the suburban city. A day later, BB-pellets were fired into the home of Ted Chiang in Arcadia, where there are only a few Asian families in a mostly white neighborhood.  A four foot cross was set ablaze on their lawn.  Police have no suspects.

In the most serious incident, a group of nazi skinheads from around the L.A. basin who were attending a party in Van Nuys attacked a group of Black and Hispanic youth in the parking lot of a supermarket near the party.  When they got the worst of the fight that ensued, the skins ran back to the party being chased by several people.  One of the other nazi-skins, according to eyewitness reports to the police, pulled out a weapon and opened fire.  However, all the wounded were nazi skins.  Geremy Rineman, 18, was paralyzed from the neck down, and two others were less seriously injured in the ankle and shoulder.  Police have made no arrests.
In related news, the L.A. County Human Relations Commission released a report on the results of a survey of all schools in the county as to the incidence of hate crimes.  About 1000 of the county’s 1500 schools responded, and almost 40% reported hate crimes and incidents in the last school year.  In junior high schools, more than 50% reported such incidents, mostly against Blacks and Hispanic students.  Blacks, who are less than 15% of the student population were the victims of more than 30% of the incidents.

Swastikas, nazi slogans and anti-semitic propaganda were sprayed, carved and pasted on Temple Emanu El in Burbank and in the vicinity of the synagogue sometime over the weekend before Halloween. Police have no suspects.

Someone fired BB-pellets into the home of a Chinese American family, and set fire to a 4-foot cross on their lawn in a mostly white neighborhood of Arcadia in the early morning hours of Oct. 22.  Police called the incident of harassment “a juvenile prank.”

Swastikas, racist graffiti and white power slogans were spray-painted on Simi Valley H.S. twice in October, once on the tennis courts, and a second time on the interior walls, after the first incident was hushed up by the administration.  In August, the home of a Black L.A. school teacher was severely damaged by racist vandals in Simi Valley.  The teacher’s son is a student at the high school, but police discounted any connection between the incidents.

Three nazi skinheads from around southern California, attending a white power party in Van Nuys, got into a name-calling match with several Black and Hispanic youths in a nearby supermarket parking lot.  When their intended targets resisted and started to chase the nazi-skins back to their party, one of the skins opened fire, according to eyewitnesses. However, he shot three of his fellows. Geremy Rineman, 18, of Huntington Beach was paralyzed.  Two other nazi skins, from Claremont and Glendale, were wounded in the shoulder and ankle.  Police have not filed any charges.

A survey conducted by the L.A. County Human Relations Commission has documented the seriousness of racially- and religiously-motivated hatred in the schools.  Of the 1500 schools in the county polled by the commission, nearly 40% of those responding, and a majority of the junior high schools reporting, acknowledged hate crimes and hate incidents in the previous school year.

The report included both attacks and name-calling serious enough to get attention from administrators.  In some cases, white kids were the targets. In many, incidents were between ethnic minorities.  However, Blacks were the victims in 30% of the cases — a rate more than twice their representation in the school population.  The rate of incidents directed at white students was less than half their percentage of the student body, in comparison.

Asian and Hispanic students were targeted for a disproportionate number of attacks and incidents motivated by anti-immigrant prejudice (even when the kids involved were not immigrants). This led the Commission to conclude that anti-immigrant attacks are probably going on in the adult population as well, but are seriously under-reported because of the fears of the immigrant victims of dealing with authorities.

I got your address from ARA/Chicago.  Myself and a few other skins started a chapter of ARA and are writing all the groups in the “syndicate” to trade anti-racist stuff.  We’re going to print t-shirts and we’re looking for good original artwork.

There’s not too much nazi activity in our area right now.  The American Front is recruiting heavily (and successfully) in Philadelphia.  I’ve also noticed a lot of Klan activity lately.  The KKK is very big in central Pennsylvania.  Many of my neighbors, teachers, etc., are members.  The Grand Dragon of PA lives in my town.

There’s about a dozen boneheads in Philly that are members of a group called “White Combat.”  Pretty original name, huh?  That’s about it.  Write back.

In your last newsletter you referred to Patrick Purdy as a neo-nazi.  I found an acquaintance of Purdy’s in Portland.  When he read about the middle eastern slogans Purdy used (in killing Indochinese kids in a Stockton school) he was surprised. He said Purdy “hated Arabs, called them sand niggers.”  According to the acquaintance, Purdy picked up an AYM newspaper, “liked it, said it was right and kept it.”  The cities where Purdy stayed on his trip between Portland and Stockton corresponds to the list of AYM chapter addresses printed in the back of that issue.

It’s an outrage the California Attorney General’s report on Purdy is being withheld while the Stockton massacre is used to the political advantage of these same people.  We in the progressive movement need to oppose the wave of gun control legislation.  The people need the means to defend themselves against the state and private organizations of violent repression.

NEXT ISSUE OF TURNING THE TIDE

In Volume III, Number 2 of T.T.T., we will be focussing on the question of prisons, jails and prisoners.  We have been getting some interesting letters from prisoners that we want to share, and we want to examine the role of the federal and state prison system and local jails in propagating racism and discrimination in our society.

We invite readers to submit letters and articles on this theme.  The next issue of TTT will be dated January-February 1990, and will be going to press just after Christmas.

Please keep your cards, letters, drawings, and donations coming.  Clippings and reports about racist and anti racist developments in your area are especially welcome.

PART is planning a demonstration concerning Tom Metzger’s new hate lines, which are springing up around the country thanks to a company called American Voice Retrieval.  By piggy-backing on to this commercial operation, Metzger is projecting WAR’s racist hate-mongering into cities where he has no physical presence.  Call AVR in Los Angeles to protest and demand they they drop Metzger from their service. (213) 468-4949.  WAR is using the company for hate-lines in Seattle, Phoenix, San Francisco and New York, and will soon be starting up in Chicago, Miami and other cities served by AVR.  Call the phone company in those cities to protest as well.  More on this in the next issue of T.T.T.